71% degrowth in project completion in Q4; coronavirus not guilty: CMIE At 71 per cent year-on-year (y-o-y) degrowth in the March quarter, India witnessed its sharpest slowdown in project completion in over 15 years.  The country completed projects worth Rs 76,923 crore against the projected Rs 4 lakh crore for the said quarter.

These are early estimates by the CMIE that are released immediately after the completion of the quarter. Figures may see upward revisions in the coming months.

The progress in the first two quarters of the financial year 2019/20 was also badly hit as the y-o-y growth tumbled over 15 per cent but the December quarter recorded a jump of nearly 20 per cent. However, the disastrous degrowth in the March quarter took a toll on the advancement of project completions for the full fiscal. As per CMIE, of the Rs 76,923 crore worth project completions in Q4, 65 per cent was completed in January 2020, 20 per cent in February and 15 per cent in March 2020. Usually, March shows a spurt in completions in response to the end of the fiscal year. However, it did not happen this time. Over the past 15 years, there have been seven instances of growth being negative in the said quarter.

This is not a Covid-19 outcome. It is safe to assume that project promoters decided to slow down the implementation of projects and postpone their completions early in the quarter, the CMIE said in its analysis. The virus caused a disruption only in the last ten days of the quarter. Deferments of projects are likely to have happened earlier in response to disappointing business results and the deteriorating business environment, it added.

Project promoters seem to have postponed project completions because the corporate sector's financial performance in 2019/20 was exceptionally poor. The aggregate net sales of non-financial companies reported a decline in the last two quarters of FY20, on a y-o-y basis, after twelve quarters of growth. All the three quarters  saw a substantial fall in their profit before and after-tax numbers. This sustained decline in performance and the worsening political climate following widespread protests against the Citizens Amendment Act, the National Population Register and the National Register of Citizens seem to have taken a toll on completion of investment projects, the analysis further added.

The current estimate of completions during 2019/20 at Rs 4.1 lakh crore is 37 per cent lower than the Rs 6.5 lakh crore worth of completions recorded in 2018/19. This again is the slowest pace of growth in over two decades. Project completions grew at a pace of around 40 per cent in 2018/19. Only about two per cent of the total outstanding projects got commissioned during 2019/20. The fall in the completion rate to two per cent in 2019/20 is comparable to the level of 2013-14. Commissioning rates have improved since then. In the past four years, on an average, around 3 per cent of the outstanding projects get commissioned in a year. 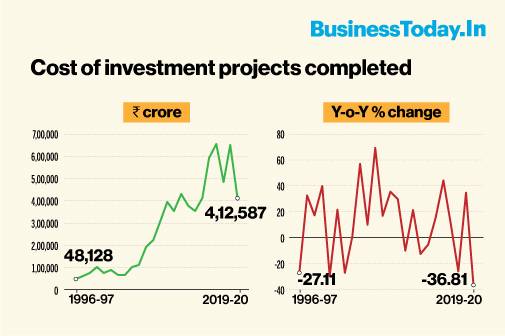 Project completions is not expected to pick up in 2020/21. This would be the year that would bear the brunt of the Coronavirus pandemic. The year has commenced with its first 15 days under a nationwide lockdown. "We expect promoters to postpone the completion of projects on hand. In January 2020, we had projected a completion of Rs 5.9 lakh crore worth of projects in 2020/21. This is revised down to Rs 5.7 lakh crore," it adds.