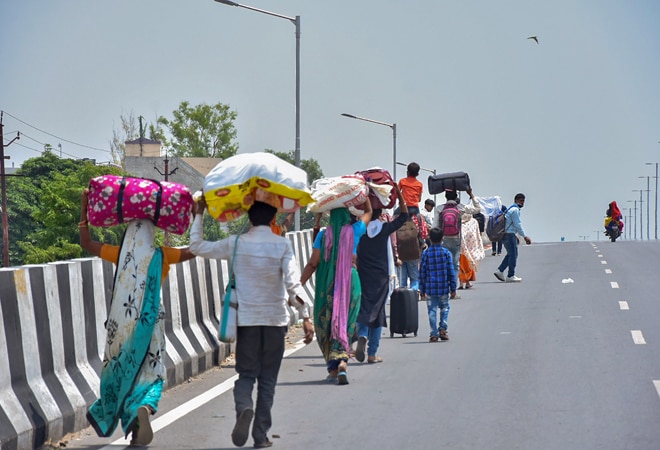 Nearly 96 per cent of the people surveyed under a food rights campaign in Maharashtra faced a drop in their earnings during the coronavirus-induced lockdown last year, claims a social body.

Job losses and non-availability of casual work were the key reasons for this, and every fifth respondent was forced to go hungry because of no money to buy food, Mukta Srivastava, the state's convener for the Anna Adhikar Abhiyan, told reporters here on Saturday.

The abhiyan, comprising a group of activists from food and nutrition sector, surveyed a total of 250 people in May and September last year in Mumbai, Thane, Raigad, Pune, Nandurbar, Solapur, Palghar, Nashik, Dhule and Jalgaon.

The Centre announced a nationwide lockdown in March last year following the outbreak of COVID-19 in the country. Later, after a few months, restrictions were gradually eased in a phased manner.

"Around 96 per cent people out of those surveyed admitted that their earnings dropped sharply in the lockdown period, and their situation remained the same five months after the lockdown was lifted," Srivastava said.

Of the total respondents, 52 per cent were from rural areas and the rest from urban limits. Those surveyed included 60 per cent women, she said.

Before the lockdown, nearly 70 per cent of the respondents had a monthly income Rs 7,000, while the remaining earned about Rs 3,000 per month, Srivastava said.

"The drop in such already low incomes underscores how hard they would have been hit," she said.

Nearly 49 per cent of respondents of the survey, conducted as part of the nationwide Right to Food Campaign, had to borrow money from friends and relatives to buy food, she said.

Asked about the earning status of respondents in the first few months after the lockdown came into force last year, Srivastava said, "During April and May, 43 per cent people had no income at all. Only 10 per cent of them have come back to their pre-lockdown income levels."

The situation of 34 per cent respondents, who had no income in April and May, remained unchanged till September- October, she said.

The findings also revealed that 12 per cent of these people sold their jewellery while three per cent sold their land during the lockdown to buy food, Srivastava said.

In nutritional aspects, the survey showed lower consumption of cereals (by 63 per cent), vegetables (76 per cent), pulses (71 per cent) and non-vegetarian food (82 per cent), she added.Also read: ISRO's first mission in 2021: PM Modi's photo, E-Gita, 18 satellites; PSLV-C51 lifts-off from Sriharikota