This job is as intense, if not more, because there's still steam left in the ongoing deceleration. Indian economy has been in slowdown mode for at least 3 quarters After the hard work of winning a comprehensive mandate for the BJP and the NDA, it's now imperative for Modi II to put all heads together and get into the nuts and bolts of turning around a slowing economy. After TsuNamo II, India now awaits TsuNomy I-a rapid economic turnaround.

This job is as intense, if not more, because there's still steam left in the ongoing deceleration. Indian economy has been in slowdown mode for at least 3 quarters and most economic indicators suggest it hasn't bottomed out just yet. "No upward momentum is visible," says Ajit Ranade, chief economist, Aditya Birla group. A slowing economy will only make the job and agri scenario worse than anything experienced so far. Modi II will have to redouble its efforts at bringing about a turnaround. The faster, the better. But how? 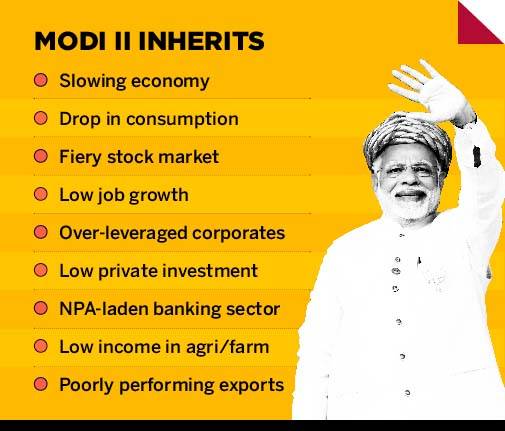 When economies go into slumber, economics has only one formula that has been tried time and again the world over: public investment and expenditure. Infrastructure creation at breakneck speed creates direct demand in sectors such as steel, cement, logistics and hundreds of allied industries. That leaves  higher disposable income in the hands of employees and businesses to spend. The resultant demand has a contagious effect on other sectors of the economy to start investing.

That, without doubt, will need to be India's turnaround formula as well. The most crucial points of reference for Modi II's economic policies are in BJP's election manifesto and the interim budget passed just before elections.

The two sectors where the BJP manifesto laid greatest emphasis are infrastructure (committing an astounding Rs 100 lakh crore investment) and the agri sector (another Rs 25 lakh crore). This trajectory is precisely what economics demands for a rapid turnaround, though the fastest revival may still be 2-3 quarters away. Next, India's been waiting for the New Industrial policy for 28 years now. The last one was in 1991. A draft policy dated August 2017 had aimed at $100 billion FDI annually, creating jobs over the next 20 years, pushing R&D, adopting new technologies such as robotics and strengthening municipal bodies. It never got the Cabinet's nod. Expect a revamped industrial policy soon to enhance India's manufacturing competitiveness and to realise the dream of Make In India.

But three sectors that will need immediate attention without which a recovery will not be possible are: banking and financial services, power and telecom. With Rs 12 lakh crore of NPAs, banks are gasping for fresh capital infusion. But filling a hole that big is beyond even the government's coffers. Expect consolidation and partial disinvestment as the way forward. "Clean-up of banking sector will facilitate better credit," says DK Joshi, chief economist, Crisil.

Modi government's target of Power for All has, according to Care Ratings, improved India's energy deficit from 8-10 per cent between 2011-13 to 0.7 per cent today. However, the power sector distress stares in the face with 40,000 MW of stranded capacity holding up between $40-60 billion of investments.

Telecom, on the other hand, has seen companies failing and vanishing in the past 2-3 years due a decline in ARPUs and profitability following Jio's intensive competition. But the sector is still burdened with over Rs 4 lakh crore of debt and a shrinking balance sheet with profitability far from sight.

Businesses can expect a run of lower interest, a simpler GST, lower corporate tax of 25 per cent to be extended even to large companies and a modified Insolvency and Bankruptcy Code lenient towards promoters. Entrepreneurs should expect the Rs 50 lakh collateral-free credit, as promised. There's likely to be a major push towards ease of doing business through single window clearances and fewer licences and a new labour law to minimise compliance and facilitate seamless opening and shutting of businesses. ALSO READ:The unfinished agenda of the Modi government in the aviation sector

An economy works on four engines-public investment, private investment, domestic consumption and exports. For the past three quarters, ever since consumption began failing, Indian economy has been driven by just one engine-public investment (government's expenditure on infrastructure and social benefits). India's private investment is at a 14 year low, according to CMIE. And the country failed to capitalise on world trade at a time when the world economy was on the rise in the past 5 years. The trend has continued as April export numbers show the 0.6 per cent growth in exports was driven largely by higher rates of oil exports. Non-oil exports are down 3 per cent. And while consumption was holding on, 3 quarters back it began decelerating with auto, FMCG and durables all declining up to 15 per cent in recent times. "Consumption growth was not because of jobs or salary hikes. Consumption was growing because of lower savings rate and higher borrowing rate in the economy in the past 5 years," says chief economist of a leading bank. The additional spending in a growing economy drove consumption despite all odds. Clearly, consumers are no more confident of such spending. Now, even corporate balance sheets are over-leveraged and profitability is stretched.

The common man can also look forward to a lot under Modi II: Agri loans up to Rs. 1 lakh at zero per cent interest for up to 5 years; Pradhan Mantri Kisan Samamn Nidhi Yojana will provide Rs 6,000 per annum to every farmer; pension to small and marginal farmers and digitisation of land records.

ALSO READ:Modi 2.0: Expect logistics costs to be driven down

The stock market and the Satta market showed unwavering faith in a Modi re-run even during the uncertain phases 4, 5, 6 of polling when Sensex briefly fell for 9 consecutive sessions by nearly 2000 points on apprehension that NDA may fall short of majority.  Two days before exit polls, however, it began reviving and more than recovered all the losses on thumping exit poll results. On the counting day, Sensex and Nifty both appear to have saluted the massive verdict by crossing the psychological milestones of 40,000 and 12,000 in intra-day trades. There's a word of caution though. The PE multiple (28.61 for Sensex) is almost at an all-time high of 28.96 of April 30, 2019. A correction is now overdue. Watch out!