The entire responsibility of maintenance and revenue generation from these stations lies with the IRSDC, which will make sure that these stations are revenue surplus. Have you ever seen a railway station in India that has a five-star hotel at its premises, ultra-modern commercial shops, video game zones, virtual museums, and all other possible means to keep you entertained and relaxed during your journey? If not, that's quite a possibility now. Under the Modi government's massive Railways redevelopment plan, two railway stations in Madhya Pradesh and Gujarat are being developed with "airport-like" facilities. Not only will they be constructed in a record time - and will be operational in the next eight-nine months - they will also be self-sufficient to undergo maintenance by generating their own revenues.

Being the backbone of the country's transport system, the Indian railways has the biggest railway network in the world, while facilities at most stations are not at par with stations at other parts of the world. Keeping this mind, the government wants to upgrade the infrastructure of the railway stations across the country by providing best services so that they become self-sufficient in carrying out maintenance and development work.

"The entire responsibility of maintenance and revenue generation from these stations lies with the IRSDC and we have to make sure that these stations are revenue surplus and to the extent that it can be invested back in the maintenance and development of the station," SK Lohia, Indian Railway Station Development Corporation (IRSDC) Managing Director and CEO told PTI. Prime Minister Narendra Modi will inaugurate the Gandhinagar railway station before the Vibrant Gujarat Summit in January 2019, said Lohia. 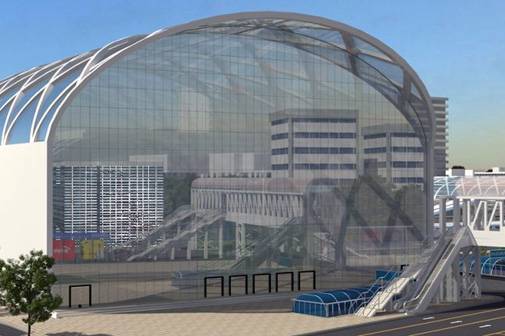 The station will have a large waiting area comprising over 600 benches with neat and clean toilets and commercial hubs. Of the total Rs 450 crore allocated for the redevelopment of the Habibganj railway station, Rs 100 will be spent on improving the infrastructure, while the rest of the amount will be spent on building glass structures and facilities for food, entertainment, and the waiting area. According to the railways, the station is expected to earn around Rs 6.5-7 crore initially, which could increase to Rs 10 crore per annum. According to Lohia, the IRSDC is also working on other ideas like installing video game zones and virtual museums to make the station more passenger-friendly and commercially viable. The proposed map of the Gandhinagar railway station.(Image source: IRSDC)

The railway station will be constructed in a record two-year time after its foundation stone was laid in January 2017. Around Rs 250 crore have been allocated for the redevelopment of the Gandhinagar railway station. The project is a special purpose vehicle (SPV) between the IRSDC and the Gujarat government. The centre of attraction at the station will be a five-star hotel comprising 300 rooms. The ground floor of the hotel, having three buildings intact together and resembling the shape of petals, will be 22 metres above the ground, while the railway track will pass underneath it.