During his grilling on Wednesday, Vadra was asked several questions for over six hours about his alleged links to defence and petroleum deal kickbacks. 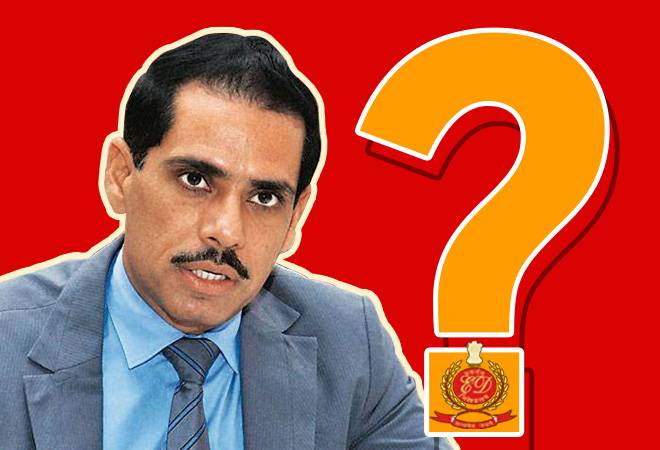 In another round of interrogation, the Enforcement Directorate will question Robert Vadra at 10AM on Thursday. Reports suggest interrogators were not satisfied with Vadra's answers during the interrogation on Wednesday, specifically his claim that he does not own properties in question, including two houses worth several lakh each and six other flats. Before his grilling, his wife Priyanka Gandhi Vadra also accompanied him to the ED office and left. The businessman was asked several questions related to his alleged links to defence and petroleum kickbacks for over six hours.

Vadra's lawyer Suman Jyoti Khaitan on Wednesday said his client had given an undertaking that he would appear before the ED whenever he would be summoned. During the gruelling question-and-answer session, Vadra reportedly answered around 40 questions related to properties allegedly owned by him, his relation to other accused in the money laundering case and charges of kickbacks received in petroleum and defence deal during UPA regime. His statement was recorded under the Prevention of Money Laundering Act (PMLA).

Also read: What are the allegations against Robert Vadra?

In his statement issued later, Vadra refuted the charges of owning multiple immovable properties in London levelled against him by the ED. During the bail trial before Delhi's Patiala House Court, the agency said it had discovered mansions and several apartments worth Rs 112 crore in total, which were allegedly owned by Vadra.

During the questioning, Vadra also denied having business ties with arms dealer Sanjay Bhandari and his cousin Sumit Chadda. He did acknowledge that he knew Manoj Arora, whom he said used to work for him. He, however, added Arora had never written an e-mail on his behalf. This was in relation to the e-mail trail between Vadra and Bhandari, which ED posed before Vadra during the questioning. The e-mail thread in question showed the two talking about refurbishing a London property, which the agency believes is owned by Vadra.

Meanwhile, West Bengal Chief Minister Mamata Banerjee has also come out in support of Robert Vadra by terming the questioning of son-in-law of UPA chairperson Sonia Gandhi by the ED as an "attempt to stop the opposition parties to unite", reported ANI.

Rober Vadra's wife, Priyanka Gandhi Vadra, who recently joined active politics, said: "Everybody knows what's happening." While accompanying him to the office, she said: "He is my husband, he is my family... I support my family," Priyanka had said in a show of support to Vadra.