Prime Minister Narendra Modi, who is away on a foreign tour, recalled his longtime association with Jaitley, saying he could not imagine that he was so far away in Bahrain when his dear friend took his last breath. 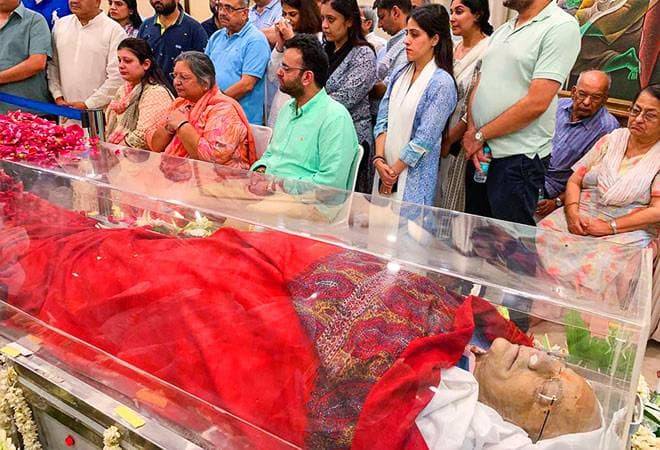 Former finance minister Arun Jaitley was cremated with full state honours on Sunday at Nigambodh Ghat in Delhi. All eminent leaders across party lines were in attendance at Jaitley's funeral ceremony amid a heavy downpour in the national capital.

Prime Minister Narendra Modi, who is away on a foreign tour, recalled his longtime association with Jaitley, saying he could not imagine that he was so far away in Bahrain when his dear friend took his last breath.

The 66-year-old BJP stalwart was an important part of PM Modi's cabinet in BJP government's first term. Arun Jaitley's biggest achievements as the finance minister in Modi Cabinet was the successful implementation of Goods and Services Tax (GST) and Insolvency and Bankruptcy Code (IBC), both of which formalised the Indian economy.

Senior leaders laid wreaths on the mortal remains and a gun salute was given before the last rites.

Wrapped in the national flag, Jaitley's body was brought at around 11 am to the BJP headquarters located on the Deen Dayal Upadhyaya Marg from his Kailash Colony residence.

BJP workers queued up in large numbers outside the party headquarters since morning to pay their last respects to the leader.

A steady stream of mourners -- from partymen to common people including schoolchildren -- filed past the body which was kept there for over two-and-a-half hours.

Party workers remembered Jaitley as a leader who always helped them when they were in need.

"I used to go to his house along with a party leader. He was a very decent and friendly person who hardly said no to any request for help by party workers," said Dildar Hussain, a BJP worker from Jama Masjid area.

A BJP worker from Girideeh in Jharkhand, Raj Kishore, who waited patiently outside the BJP office to pay homage to Jaitley, termed him as a "sober" politician who never hurt anyone with his words or deeds.

"His conduct and his manners were impeccable. I have heard several stories of how he helped ordinary party workers whenever they approached him," Kishore said.

Similar sentiments were expressed by many party leaders and workers who thronged the BJP headquarters to pay homage to the departed leader.

As the body was taken to the cremation ground in a flower-decked gun carriage, slogans of 'Jaitley ji amar rahein' (long live Jaitley) rent the air.

Shah, Nadda, Singh and other leaders followed the carriage in their cars from party headquarters to the Nigambodh ghat.