A senior fellow at the Peterson Institute for International Economics, Arvind Subramanian's appointment was recommended by Finance Minister Arun Jaitley. A Cabinet-level approval is expected to follow. According to two sources at the finance ministry "he is likely to be appointed soon."

In a major speech last week, the Prime Minister complained that he had to contend with competing government "fiefdoms". Bringing in outside experts capable of challenging an entrenched bureaucracy could help him implement his policy agenda. 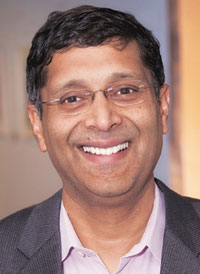 Arvind Subramanian is a senior fellow at the Peterson Institute for International Economics
If confirmed, Subramanian will be the second economist of international renown to take charge of a key policy post after former International Monetary Fund chief economist Raghuram Rajan was appointed as the governor of Reserve Bank of India last year.

Subramanian is a senior fellow at the Peterson Institute for International Economics. His appointment was recommended by Finance Minister Arun Jaitley. A Cabinet-level approval is expected to follow.

Modi stormed to a general election victory in May with a pledge to lift the economy out of its worst slowdown in a quarter of a century and put to work the one million young people who enter the workforce each month.

The Prime Minister has abolished a Soviet-style Planning Commission, but made an otherwise slow start on economic reforms, disappointing some supporters who had hoped that he would take decisive action to promote a recovery.

Subramanian was educated in India and Britain and went on to serve at the International Monetary Fund (IMF) and at the forerunner to the World Trade Organization (WTO), before taking senior academic posts at Harvard and Johns Hopkins universities in the United States.

Recently, he criticised the government's decision to derail a WTO deal struck last year to streamline trade procedures by tying it to a separate controversy over food subsidies.

"Yes, supporting agriculture is valid, but no, the tactic may be less so," Subramanian wrote in a commentary in July-end.

He also criticised Finance Minister Arun Jaitley's maiden budget for being too optimistic in its revenue forecasts, saying it had failed to come clean on its fiscal accounting, and that it lacked timelines for passing crucial tax and subsidy reforms.

"More importantly, though, transparency and credible numbers evoke confidence; unreliable numbers will eventually elicit cynicism," he wrote in a column.

The Finance Minister stood by a fiscal deficit target of 4.1 per cent of gross domestic product for the current fiscal year to March 2015, even though the deficit had already hit nearly half that figure by the time he rose to address the Parliament last month.

If confirmed for a three-year term, Subramanian would be Jaitley's top advisor - a position vacant since Raghuram Rajan moved to the Reserve Bank of India as Governor last fall and started a shift to a more modern, Western-style policy of inflation targeting.

He would be responsible for producing the annual Economic Survey, which documents the state of the economy and underpins the drafting of the budget - and a mid-year economic update that is presented to the Parliament.

"Given his background and work experience in the IMF and other places, I am sure, he would be a very good replacement," said NR Bhanumurthy, an economist at the National Institute of Public Finance and Policy, a Delhi-based think tank.

Govt raises import duty on sugar to 25 per cent