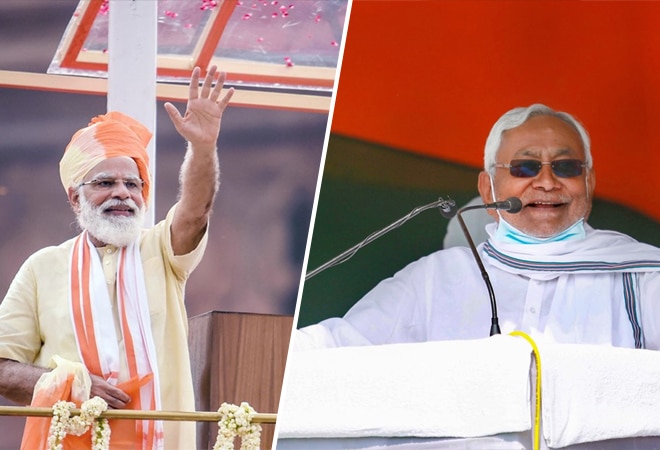 Conquering the challenges of the 15 years of anti-incumbency, a resurgent opposition, and coronavirus crisis, the Nitish Kumar-led NDA is back to power in Bihar with a majority.

The ruling coalition of the Bharatiya Janata Party (BJP) and Janata Dal-United (JD-U) won 125 seats in the 243-Assembly seats, paving way for the fourth term for Kumar in the chief minister's office.

On the victory of the NDA alliance, Prime Minister Modi thanked the people of Bihar and party workers on Twitter. PM held dozens of rallies during the Bihar election campaign.

"Democracy has once again won in Bihar with the blessings of the people. The determination and dedication with which all NDA workers worked are commendable. I congratulate the workers and express my heartfelt gratitude to the people of Bihar," PM Modi tweeted in Hindi.

He added, "Ever section of Bihar has believed in NDA's mantra of 'Sabka Saath Sabka Vikas, Sabka Vishwas'. I again assure we will continue to work zealously for the balanced development of every person, every region".

Opposition Rashtriya Janata Dal (RJD) emerged as the single largest party by winning all the 75 seats it contested. The BJP, which led the table for several hours during the counting that dragged on for over 16 hours, finished second with a tally of 74 seats. The BJP's ally JD (U) witnessed a slender setback as it could only win 43 seats. The other NDA alliance partners -- HAM and Vikassheel Insaan Party (VIP) won four seats each.

Despite the slump in numbers, Kumar, who was declared the NDA's chief ministerial candidate by the BJP brass, is set to take over the reins of the government.

However, the drastic fall in the number of JD(U) MLAs will likely make the BJP, which hitherto played a second fiddle to Nitish Kumar, more assertive in Bihar Assembly. The saffron party may insist on a larger share in the ministerial posts and a greater say in the governance.

Asaduddin Owaisi's AIMIM party emerged as a surprise package of the election, winning five seats. The party made significant inroads into the Seemanchal region, which has a large presence of Muslim voters. Its ally BSP also clinched one seat.

The election also saw the coming of age of Tejashwi Yadav, 31, who came across as an indefatigable leader after the RJD's unprecedented drubbing in the Lok Sabha polls last year when it failed to open its account.

Brothers Tejashwi Yadav and Tej Pratap won the Raghopur and Hasanpur seats with impressive margins of 38,174 and 21,139 votes, respectively.

A major upshot of the grueling electoral tussle between the two alliances was the resurgence of Left, which aligned with RJD-led Mahagathbandhan. The biggest gainer was the CPI-ML, which clinched 12 seats, followed by the CPI and CPI-M (two each).