Over the last 10 days, around 7.3 crore voters queued outside the polling station to choose Bihar's next Chief Minister amid the COVID-19 pandemic; there are a total of 243 assembly seats in Bihar 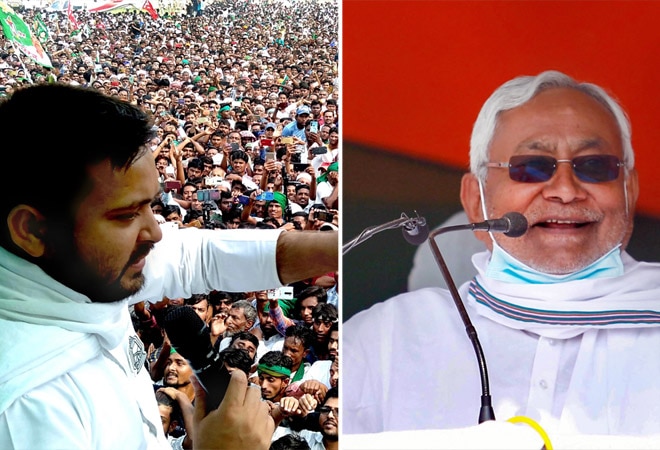 Most of the exit polls have predicted the victory of Lalu Yadav's son and Rashtriya Janata Dal (RJD) leader Tejashwi Yadav in the Bihar election 2020. RJD-Congress Grand Alliance is most likely to come into power in the state, while the NDA alliance might be the runner-up. Chirag Paswan's Lok Janshakti Party might face a big defeat, as per the exit polls.

Over the last 10 days, around 7.3 crore voters queued outside the polling station to choose Bihar's next Chief Minister amid the COVID-19 pandemic. Voting for the Bihar assembly election was held in three phases from October 27 to November 7. There are a total of 243 assembly seats in Bihar.

According to India Today-Axis My India exit poll, 44 per cent of respondents want to see RJD's Tejashwi Yadav as the next Bihar CM, 35 per cent wanted JDU's Nitish Kumar as CM, and merely seven per cent respondent said they wanted Chirag Paswan as the new CM of Bihar.

Republic TV-Jan Ki Baat exit poll has predicted that RJD will emerge as the single largest party in Bihar. The exit poll has projected Grand Alliance (Mahagathbandhan) will achieve between 118 and 138 seats. Whereas, NDA alliance will win between 91-117 seats. Chirag Paswan's LJP will be able to secure between 5-8 seats.

Times Now-CVoter has also shared hung assembly in Bihar. According to them, Grand Alliance will win 120 seats, whereas NDA might get 116 seats. In the NDA, BJP might achieve 70 seats, JDU 40, Hindustani Awam Morcha (HAM)  2, and Vikassheel Insaan Party (VIP) 2.

TV9 Bhatarvarsh has also forecast Grand Alliance's victory. According to them, NDA is expected to win 110-120 seats, while the Grand Alliance might garner anywhere between 115-125 seats.

According to predictions by Today's Chanakya, RJD and Congress-led grand alliance will corner 44 per cent of the vote share in Bihar Assembly election, while the NDA will get 34 per cent vote share.

In 2015, Lalu Yadav's Rashtriya Janata Dal (RJD) and Janata Dal (United) JDU fought the election together as part of the Mahagathbandhan (Grand Alliance) and won 178 constituencies out of the total 243. However, differences emerged between the RJD and the JD(U) and the latter came back to the NDA fold in 2017.