As per data compiled by the Ministry of Micro, Small and Medium Enterprises (MSMEs), Bihar ranked number 3 in MSME registration leaving behind the most populous state of Uttar Pradesh and the industrial states of Gujarat and Karnataka The unusual rise in new MSME registrations surprised many

Migrant worker crisis has put the spotlight on lack of industrialisation and fewer job opportunities in Bihar and Uttar Pradesh (UP) but government data show that the two states outperformed some of the most industrialised peers in MSME registration.

As per data compiled by the Ministry of Micro, Small and Medium Enterprises (MSMEs), Bihar ranked number 3 leaving behind the most populous state of Uttar Pradesh and the industrial states of Gujarat and Karnataka.

As many as 8.73 lakh budding entrepreneurs enrolled themselves on the central government's Udyog Aadhaar Portal between October 2015 and December 2019, according to the latest data compiled by the MSME Ministry. With 8.06 lakh new registrations, UP stood fourth in the pecking order.

The government launched Udyog Aadhaar Memorandum (UAM) portal to promote ease-of-doing-business for MSMEs in India. It now replaces the need for filing Entrepreneurs Memorandum (EM Part-I & II). The UAM provides instant registration making the process easy and paperless. It enables wider coverage of MSMEs to avail the benefits under various schemes of both central and state governments. 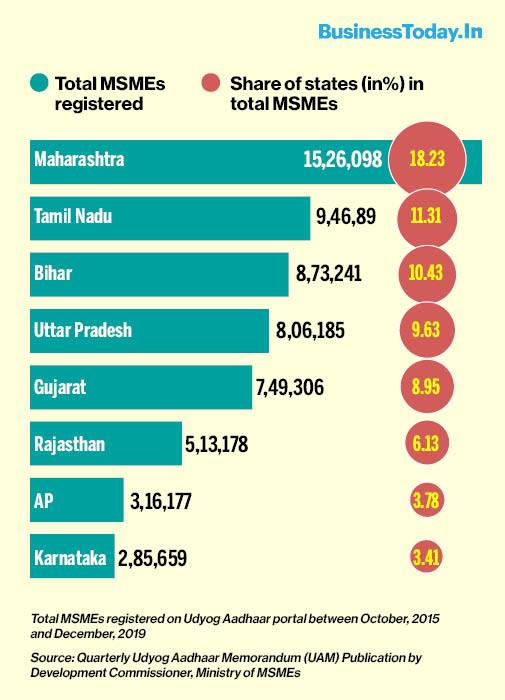 While the unusual rise in new MSME registrations surprised many, industry insiders said that the people may have registered themselves to avail loans and various central schemes to promote MSMEs in the country.

"A good number of people registered on the Udyog Aadhaar portal assuming financial support from the government. Since registration does not require pre-inspection before allotting the number, people rushed for it," said an official.

"The Udyog Aadhaar Portal data does not serve any purpose. It is not the number which can be relied upon," said VK Aggarwal, Managing Director of Shashi Cables, a Lucknow-based medium enterprise.

With MSME status, smaller firms also get preference in public procurement. The central government has mandated it for all government departments, agencies and PSUs to procure 25 per cent of their supplies from MSME firms.

All these MSMEs together employed 4.66 crore persons during the period with majority 61.46 per cent working with micro enterprises.

"States like UP, Bihar, Odisha and Jharkhand can map the skills of the workers and provide hand-holding to help them start their own small enterprise but it will take a lot of effort and government machinery to really work hard," Saxena said.

With lack of industrialisation, a large number of workers from these states travel to Maharashtra, Gujarat, Tamil Nadu and Karnataka in search of livelihood. But the ongoing migrant worker crisis has exposed their precarity.