Catch top stories today from the world of business and economics with BusinessToday.In end of day (EOD) report 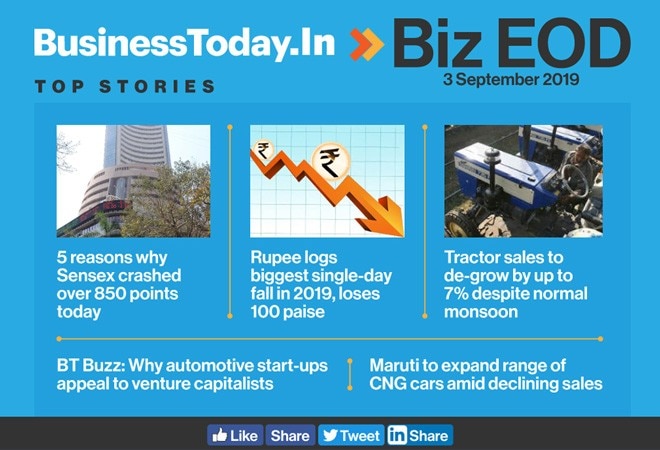 Top stories from the world of business and economics.

After discouraging macroeconomic figures confirmed a slowdown in Indian economy, equity benchmarks Sensex and Nifty declined over 2 per cent each on heavy selling in PSU banks and auto indices. Meanwhile, more bad news continued to flow in from the already struggling auto sector. Read on for more headlines from the world of business and economics today:

Following weak GDP growth figures for the June quarter, the equity market crashed on Tuesday with Sensex and Nifty declining over 2 per cent each on heavy selling in PSU banks and auto indices.

The Indian currency extended its fall in late afternoon session, declining 100 paise to 72.40 per dollar. Later in the day, the Indian rupee closed 99 paise lower at 72.39 to the US dollar.

3. Tractor sales to de-grow by up to 7% despite normal monsoon

The decline in sales so far is due to weak growth in rural income and moderation in rural infrastructure spending. Rural incomes were impacted towards the second half of last fiscal due to flat crop production.

Global investors' interest in Indian auto-tech start-ups comes at a time when the the country's automobile sector is battling its highest de-growth in monthly sales over the past 19 years.

5. Maruti to expand range of CNG cars amid declining sales

Maruti Suzuki plans to make its entire small car portfolio available in CNG variants. It is looking at the CNG option to fill the space currently occupied by diesel cars, which it intends to stop selling by April 2020.