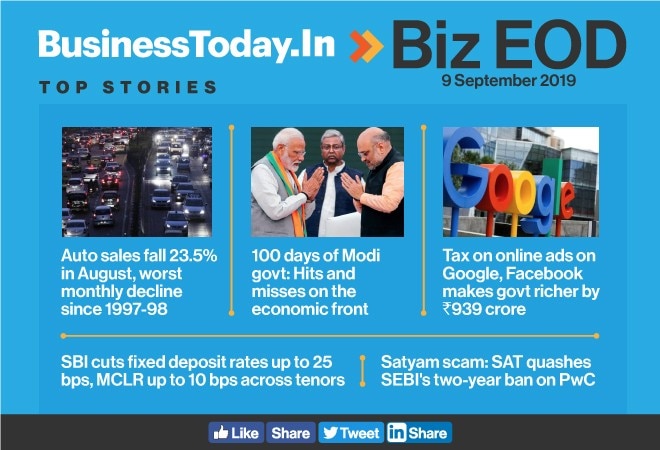 Sale of automobiles in India crashed by 23.5 per cent in August, the worst ever decline in a month on a year-on-year basis since 1997-98. Meanwhile, the Modi government completed 100 days of its second term as the economy continued unde a lot of stress. Read on for more headlines from the world of business and economics today:

2. 100 days of Modi govt: Hits and misses on the economic front

Minister for Information and Broadcasting Prakash Javadekar said, "no other government in the past has taken so many people-friendly decisions in its first 100 days in power".

Going by the 6 per cent tax rate for the equalisation levy, the tax collection of Rs 939 crore in FY19 suggests that Indian entities shelled out at least Rs 15,650 crore to place advertisements with digital giants such as Google, Facebook and mobile phone apps, up from the Rs 9,800 crore they spent in FY18.

4. SBI cuts fixed deposit rates up to 25 bps, MCLR up to 10 bps across tenors

The new rates will be effective from Tuesday. This is the third rate reduction announced by SBI in the current fiscal year.

Quashing the ban on PwC, the SAT ruled that the ban imposed by SEBI was "erroneous in law", and only ICAI has the right to take action against auditing firms.