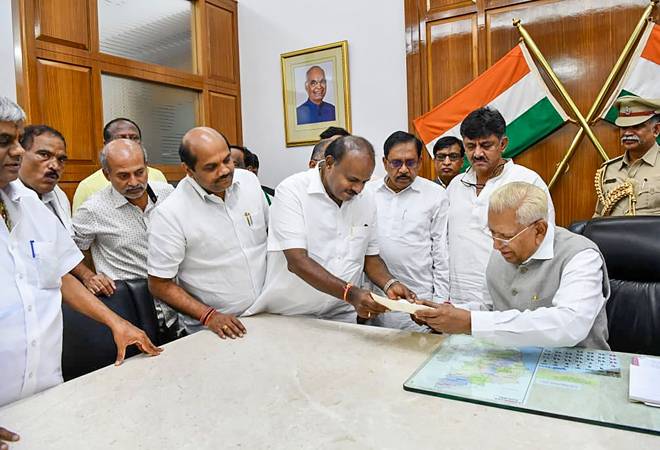 After its coalition government with the JD(S) in Karnataka collapsed, the Congress on Tuesday accused the BJP of carrying out "one of the most heinous" horse-trading the country has ever seen and said it will hold nationwide protests against the "immoral political destabilisation".

"From its first day, the Cong-JDS alliance in Karnataka was a target for vested interests, both within & outside, who saw the alliance as a threat & an obstacle in their path to power. Their greed won today," Gandhi tweeted.

"Democracy, honesty and the people of Karnataka lost," he said.

Reacting to the development, Congress general secretary Priyanka Gandhi Vadra said one day the BJP will discover that everything cannot be bought, everyone cannot be bullied and every lie is eventually exposed.

"Until then I suppose, the citizens of our country will have to endure their unbridled corruption, the systematic dismantling of institutions that protect the people's interests and the weakening of a democracy that took decades of toil and sacrifice to build," she said.

The Congress-JD(S) government in Karnataka collapsed on Monday after the confidence motion moved by Chief Minister H D Kumaraswamy was defeated in the assembly, ending his 14-month long turbulent tenure.

Soon after the government lost the trust vote, Congress' AICC in-charge Karnataka K C Venugopal said the "subversion of coalition government" in the state carried out by the BJP is "one of the most heinous" political horse-trading the country has ever witnessed.

It was done by the "nefarious" joint efforts of the central government, governor, Maharashtra government and the BJP leadership, he said.

"BJP facilitated this dirty-dealing political drama by offering a huge amount of black money and ministerial berths to the defected MLAs. Along with this, the BJP also misused central agencies like enforcement and Income Tax for blackmailing and horse-trading," Venugopal said in a series of tweets.

The BJP has carried out "one of the biggest political subversions and hawala transactions" to destabilise the coalition government in Karnataka, the AICC general secretary organisation alleged.

A video evidence of BJP leaders offering money to the defected MLAs for destabilising the coalition government and carrying out political horse-trading has been shown even in the legislative assembly, he said.

The Congress and the JD(S) fought in the floor of the house, Supreme Court as well as in the street to uphold the democratic morals and values, Venugopal said.

All the MLAs, who stood with the party, and workers who fought for upholding political morality in the state deserve huge respect, he said.

Although the BJP could get an upper hand in the legislative assembly in terms of the number of MLAs, the Congress-JD(S) had earned the moral victory, Venugopal claimed.

The Congress will hold nationwide protests against the "immoral political destabilisation" carried out by the BJP, the Congress leader said.

In a statement, he also said political morality and basic democratic values got defeated by the "unscrupulous political horse-trading" of the BJP in Karnataka.

"The sabotage of a duly-elected government in Karnataka carried out by the BJP is one of the most heinous and subversive instances of blatant political horse-trading the country has ever witnessed," he said.

The turmoil reached the climax after dramatic twists and turns that saw the MLAs of rival camps being corralled in resorts and hotels, allegations of bribery, rebel lawmakers knocked the doors of the Supreme Court to decide on the issues of whip, floor test and governor's intervention.

Sixteen MLAs -- 13 from the Congress and three from the JD(S) -- had resigned, while Independent MLAs R Shankar and H Nagesh had withdrawn their support to the coalition government, pushing it to the precipice.

One Congress member Ramalinga Reddy retracted from his decision to resign, saying he would support the government.

Capping a three-week-long high-voltage intense power struggle triggered by a raft of resignations by rebel lawmakers that pushed the government to the brink of collapse, the motion in the Karnataka Assembly was defeated with 99 members voting for the motion and 105 against it.