Former Finance Minister Arun Jaitley has been admitted to Cardiothoracic and Neurosciences centre in AIIMS, New Delhi after his condition turned critical Former Finance Minister Arun Jaitley has been admitted in All India Institute of Medical Sciences (AIIMS) on Friday after he had had trouble breathing. The senior BJP was suffering from ill health for a long time and was rushed to AIIMS he complained of uneasiness.

Below are the Live Updates on Arun Jaitley's health at BusinessToday.In:

09:20 pm: "Arun Jaitley was admitted to AIIMS today morning. He is currently undergoing treatmentin the intensive care unit under the supervision of a multidisciplinary team of doctors. At present he is haemodynamically stable," said a bulletin by AIIMS, New Delhi. 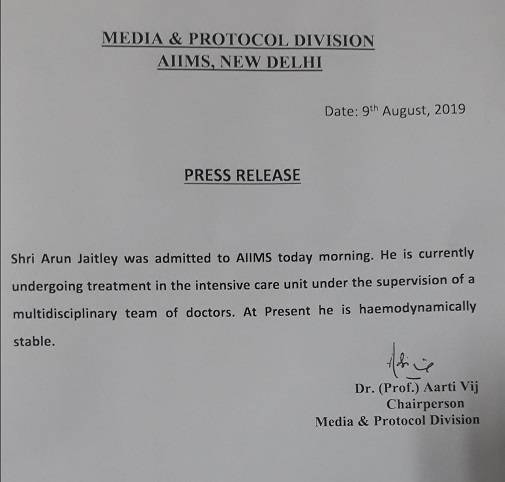 08:39 pm: Arun Jaitley's condition is stable. A medical bulletin with updates on his health will be released at 10:30 pm.

08:31 pm: PM Modi has left AIIMS. Other senior leaders are still at the hospital.

07:50 pm: Former Finance Minister is at All India Institute of Medical Sciences (AIIMS) for regular medical check-up after he complained of uneasiness and trouble in breathing.