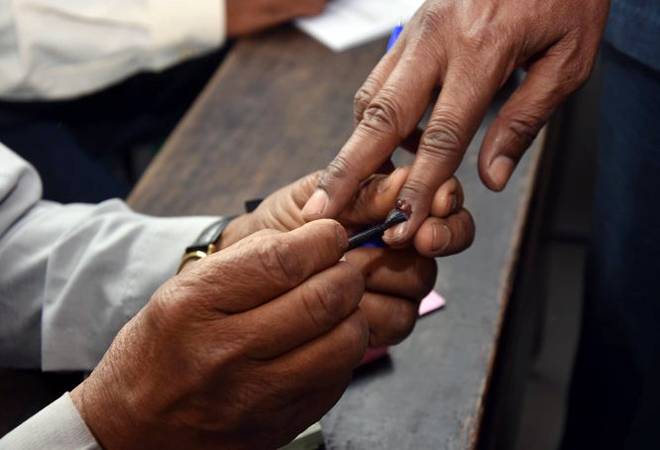 Bypolls 2019: The counting of votes of the assembly buy polls will take place on October 24. (picture credit: IANS)

Voting for bypolls in 51 Assembly seats and two Lok Sabha constituencies has begun across 18 states on Monday, October 21. Among these 51 Assembly seats, BJP and its allies had won nearly 30 seats, while the Congress party won on 12 and the rest seats were with regional parties.

Voting for bypolls to 11 Assembly seats in Uttar Pradesh began at 7 am in the morning. It is a four-cornered contest this time, with the BJP, Bahujan Samaj Party (BSP), Samajwadi Party (SP) and Congress fielding candidates on all 11 Assembly seats. Eight of the 11 seats were held by the BJP earlier and one by BJP-ally Apna Dal (Sonelal). The seats of Rampur and Jalalpur (Ambedkarnagar) were held by Samajwadi Party and Bahujan Samaj Party, respectively.

In Gujarat, the Assembly bypolls are being held six seats, including Tharad, Radhanpur, Kheralu, Bayad, Amraiwadi and Lunawada seats. A total of 42 candidates are in the fray for the bypolls. Byelections were necessitated in Radhanpur and Bayad due to the resignations of sitting MLAs Alpesh Thakor and Dhavalsinh Zala, who quit the Congress and joined the BJP. Besides, bypolls became necessary in Tharad, Lunawada, Kheralu and Amraiwadi after the BJP MLAs of these seats got elected to the Lok Sabha.

Polling has begun in the five assembly constituencies in Kerala today.  In the recent Lok Sabha polls, post-Sabarimala agitation, the Left front had suffered a massive drubbing, losing 19 of the total 20 seats to the Congress-led UDF. A total of 9.57 lakh voters are expected to participate in the bypolls being held in Vattiyoorkavu (Thiruvananthapuram), Aroor (Alapuzha), Konni (Pathnamthitta), Ernakulam and Manjeshwaram (Kasaragod). Three of the assembly seats where bypolls are being held were with the Congress.

The electoral fate of 35 candidates in two assembly constituencies -- Vikravandi and Nanguneri -- in Tamil Nadu has started.

Bypoll in Vikravandi was necessitated following the death of DMK legislator K Rathamani in June, while the Nanguneri seat fell vacant as Congress legislator H Vasantha Kumar resigned after he got elected for the Lok Sabha.

Sikkim Chief Minister Prem Singh Tamang is contesting from Poklok Kamrang constitueny, one of the three seats where bypolls will be held in the state. Tamang aka Golay is the president of Sikkim Krantikari Morcha (SKM), which has tied up with the BJP. Former Indian football team captain Bhaichung Bhutia is contesting from Gangtok on Hamro Sikkim Party (HSP) ticket.

Voting for the bypoll to Naxal-affected Chitrakot Assembly constituency in Chhattisgarh began on Monday. Six candidates are in fray from the seat, reserved for Scheduled Tribe (ST) candidates, where the byelection was necessitated after Congress MLA Deepak Baij got elected to the Lok Sabha from Bastar parliamentary constituency.  In the state polls held last year for the 90-member Assembly, the Congress won 68 seats and the BJP bagged 15.

Rajasthan's Mandawa and Khivsar assembly constituencies are going under assembly polls on Monday. The by-elections on both the seats are being held after Khivsar (Nagaur) MLA Hanuman Beniwal and Mandawa (Jhunjhunu) MLA Narendra Kumar were elected to the Lok Sabha in May this year. As many as 12 candidates, nine in Mandawa and three in Khivsar, are in the fray.

In Madhya Pradesh, Jhabua Assembly seat is witnessing a bypoll today. The main contestants for the bypoll are senior Congress leader Kantilal Bhuria and BJP's Bhanu Bhuria, who is making his electoral debut.

By-elections to the four Assam Assembly constituencies - Rangapara, Sonari, Ratabari and Jania - are being held in order to to decide the fate of 20 contestants. The bypolls were necessitated with two sitting BJP MLAs and ministers Pallab Lochan Das (Rangapara) and Tapan Gogoi (Sonari), Deputy Speaker Kripanath Mallah (Ratabari) and Congress MLA Abdul Khaleque (Jania) elected to the Lok Sabha.

The BJD and BJP are locked in a direct fight while the Congress is hoping to pull it off as the bypoll to Bijepur assembly seat in Odisha's Bargarh district has kicked off. The by-election in Bijepur  was necessitated after Chief Minister Naveen Patnaik, who had won two segments in the assembly polls held early this year, resigned from Bijepur and retained his home turf Hinjili in Ganjam district.

The bypolls to two assembly seats in Himachal Pradesh--and Dharamshala have started. The bypolls in this hilly state have been necessitated after sitting BJP MLAs Suresh Kashyap and Kishan Kapoor, respectively, were elected to the Lok Sabha this May.

The other four states where voting for the assembly polls is happening today are-Meghalaya, Telangana, Arunachal Pradesh and Puducherry. The counting of votes of the assembly buy polls will take place on October 24.  The Election Commission had earlier announced bypolls to 15 assembly seats in Karnataka too. But they will be now be held in December.