China is likely to set up military base in Pakistan: Pentagon

China is likely to establish additional military bases in Pakistan and other countries with which it has a longstanding friendly ties and similar strategic interests, a new Pentagon report has said. 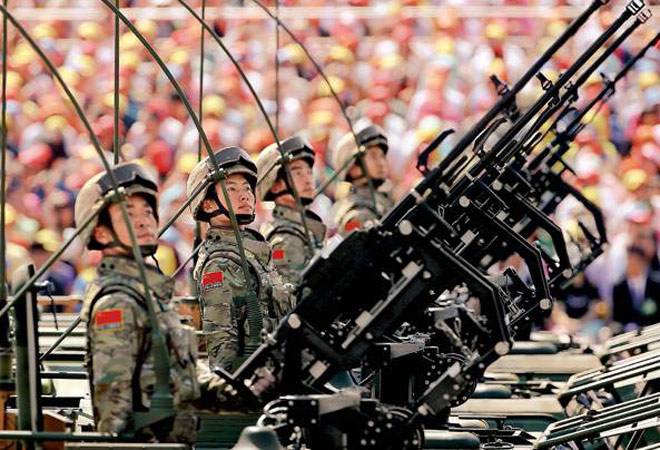 China is likely to establish additional military bases in Pakistan and other countries with which it has a longstanding friendly ties and similar strategic interests, a new Pentagon report has said.

In its annual report to the Congress on China's military build-up, the US Department of Defence said China's construction of military base in the strategic location of Djibouti is just the first of what will likely be an ongoing expansion in friendly foreign ports around the world.

China is expanding its access to foreign ports to pre- position the necessary logistics support to regularise and sustain deployments in the "far seas", waters as distant as the Indian Ocean, Mediterranean Sea and Atlantic Ocean.

"China most likely will seek to establish additional military bases in countries with which it has a longstanding friendly relationship and similar strategic interests, such as Pakistan, and in which there is a precedent for hosting foreign militaries," the Pentagon said.

The report cautioned, however, that China's efforts to build more bases "may be constrained by the willingness of countries to support" the presence of China's People's Liberation Army in one of their ports.

Notably, China is developing the strategically located Gwadar port in Balochistan, which many experts in the US say is aimed towards having a military presence.

"In February 2016, China began construction of a military base in Djibouti and probably will complete it within the next year," it said, adding China claims that this facility is designed to help the navy and army further participate in UN peacekeeping operations, carry out escort missions in the waters near Somalia and the Gulf of Aden, and provide humanitarian assistance.

This initiative, along with regular naval vessel visits to foreign ports, both reflects and amplifies China s growing influence, extending the reach of its armed forces.

China has cited anti-piracy patrolling as one of the reasons for developing what it calls a naval logistics center in Djibouti.

China, the report said, uses PLA engagements with foreign militaries to enhance its presence and influence abroad, bolster its image and assuage other countries concerns about its rise.

"These engagements also assist PLA modernisation by facilitating the acquisition of advanced weapon systems and technologies, increasing its operational experience throughout and beyond Asia, and giving the PLA access to foreign military practices, operational doctrine, and training methods, it added.

In 2016, China conducted counterpiracy operations in the Gulf of Aden by deploying its 24th naval escort task force to the area since 2008, it said.

"China also continued to send submarines to the Indian Ocean, ostensibly in support of its counterpiracy patrols. In May 2016, a nuclear-powered attack submarine conducted a port call in Karachi, Pakistan, during a visit by the People's Liberation Army Navy (PLAN) Commander, marking China s first port call in South Asia by a nuclear submarine, the Pentagon said.

"These submarine patrols demonstrate the PLAN s emerging capability both to protect China's SLOCs and to increase China s power projection into the Indian Ocean, the report said.

According to the Pentagon, Pakistan is also China s largest buyer of arms. From 2011 to 2015, China was the world s fourth largest arms supplier with more than USD 20 billion in sales.

"Of this, $9 billion was to Asia-Pacific countries, primarily Pakistan, it added.

"China s ability to remain among the world s top five global arms suppliers hinges largely on continued strong sales to Pakistan and demand for its armed UAVs. China is one of only a few global suppliers of such equipment and faces little competition for sales to the Middle East and North Africa.

Last year, China signed an agreement with Pakistan for the sale of eight submarines, it said, adding that the first four will be built in China, with the remaining four in Pakistan.

Other major Asia-Pacific customers of Chinese military equipment include Bangladesh and Burma, it said.

China faces little competition for sale of such systems, as most countries that produce them are restricted in selling the technology as signatories of the Missile Technology Control Regime (MTCR) and/or the Wassenaar Arrangement on Export Controls for Conventional Arms and Dual-Use Goods and Technologies (WA), as well as subjecting exports of this technology to greater scrutiny than China, it said.

India's Q2 economy will be better than Q1: Nomura