His remarks came as Nepal's ruling and Opposition political parties on Saturday voted in unison to amend the Constitution to update the national emblem by incorporating the controversial map incorporating Lipulekh, Kalapani and Limpiyadhura in India's Uttarakhand 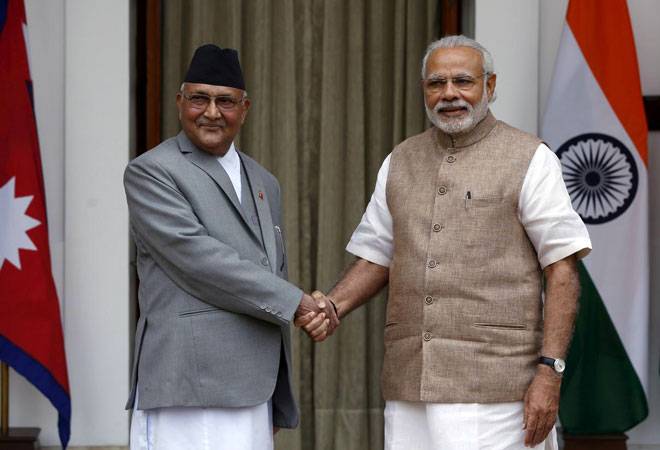 Nepal-India relationship should not deteriorate over the current border row as the landlocked country is dependent on its southern neighbour for the essential items and it would be unwise to consider China as an "alternative", a leading Nepali economist said on Monday.

Commenting on Nepal's move to amend the Constitution for incorporating India's territory of Lipulekh, Kalapani and Limpiyadhura, Dr Posh Raj Pandey, the executive chairman of the South Asia Watch on Trade Economics and Environment (SAWTEE), a consortium of South Asian NGOs, said that its economic impact will depend upon how India reacts.

Nepal is not only a landlocked country, but also India locked as it is surrounded by India from the three sides. The situation will be vulnerable. If India retaliates, it will have a huge economic impact on the country, said Pandey, who has been working on issues of international trade and economic development for over 20 years.

His remarks came as Nepal's ruling and Opposition political parties on Saturday voted in unison to amend the Constitution to update the national emblem by incorporating the controversial map incorporating Lipulekh, Kalapani and Limpiyadhura in India's Uttarakhand.

Pandey said that the Nepal-India relations should not be allowed to damage and there is a need for early negotiations and a dialogue to resolve the issue at the earliest .

Nepal is dependent on India for the supply of essential goods, said the economist, who was one of the negotiators for Nepal's accession negotiation for the World Trade Organisation membership.

Our imports from India account for two-third whereas that from China is just 14 per cent, Pandey, a former member of the National Planning Commission, said, adding that China cannot be an alternative to India as far as the supply of essentials are concerned.

We have trading points from Mechi in the east to Mahakali in the west with India, but with the northern neighbour, we only have a few transit points and that also lack infrastructure, he said.

Pandey said that Nepal's nearest access to sea from the north is 4,000 kms, which is three times more than the one it is having from the Indian side in Kolkata.

So, our third country trade is being conducted mainly through the southern route, he said.

As far as our exports are concerned, India receives 60 per cent of our total exports whereas China receives only two per cent.

In remittances, we receive around 15 per cent of the total remittances from India and if we compare it with the Gross Domestic Product (GDP), it comes around 4-5 per cent, Pandey said.

However, Nepal is also one of the largest sources of remittances for India, he said.

According to a 2016 World Bank report, Nepal is on the tenth position in the list of countries sending remittances to India, which is on par with the US and Canada, he said.

According to the Nepal Rastra Bank, the country's central bank received a total of 304.97 billion Nepali rupees or USD 2.54 billion remittance in 2019.

India accounts for the 14.2 per cent remittances to Nepal, securing the second position after the Gulf countries.

Reacting to Kathmandu's move, Ministry of External Affairs Spokesperson Anurag Srivastava said on Saturday "this artificial enlargement of claims is not based on historical fact or evidence and is not tenable. It is also violative of our current understanding to hold talks on outstanding boundary issues."

The India-Nepal bilateral ties came under fresh strain after Defence Minister Rajnath Singh inaugurated a 80-km-long strategically crucial road connecting the Lipulekh pass with Dharchula in Uttarakhand on May 8.

Nepal reacted sharply to the inauguration of the road claiming that it passed through Nepalese territory. India rejected the claim asserting that the road lies completely within its territory.

In 2015, India's relations with Nepal came under severe strain following the economic blockade.

Madhesis, mostly of Indian-origin, had launched a six-month-long agitation during K P Sharma Oli's premiership, from September 2015 to February last year, in which more than 50 people were killed.

The agitation crippled Nepal's economy as supplies from India were blocked.

Since then, China has been active in Nepal and has invested hugely, helping the landlocked country in laying new roads including connecting it to Tibet for the transportation of petroleum and other essential products, ostensibly to help Kathmandu cut dependence on India.

China is also planning to lay a strategic railway network connecting Kathmandu and Shigatse in Tibet where it would join an existing railway line to Lhasa, Tibet's capital. It has offered Nepal four ports for shipment of goods which rely heavily on India.

Nepal shares a border of over 1,850 km with Sikkim, West Bengal, Bihar, Uttar Pradesh and Uttarakhand.

Nepal enjoys a special significance in India's foreign policy due to its geographical, historical, cultural and economic linkages. The people of the two countries maintain close bonds through marriages and family ties, also known as 'Roti-Beti ka Rishta' (relation of food and family).

According to the official data, nearly eight million Nepalese live and work in India. The two countries also have solid defence and trade ties. About 32,000 Gorkha soldiers from Nepal are serving in the Indian Army.