India's per capita income to drop 5.4% in FY21; inequality to narrow down: SBI report Arunachal Pradesh, Goa, and Manipur are expected to see the least drop in per capita income in FY21

As per the report, rich states (states whose per capita income is greater that all India average) will be most affected in per capita income terms. A total of 8 states and Union Territories, which constitute as much as 47% of India's GDP, are expected to see an alarming decline in PCI in double digits in FY21, it highlighted.

State-wise, Delhi, Chandigarh, and Gujarat will be worst hit with PCI projected to drop by 15.4%, 13.9% and 11.6%, respectively in FY21. Meanwhile, Arunachal Pradesh, Goa, and Manipur are expected to see the least drop in PCI during the period under review. 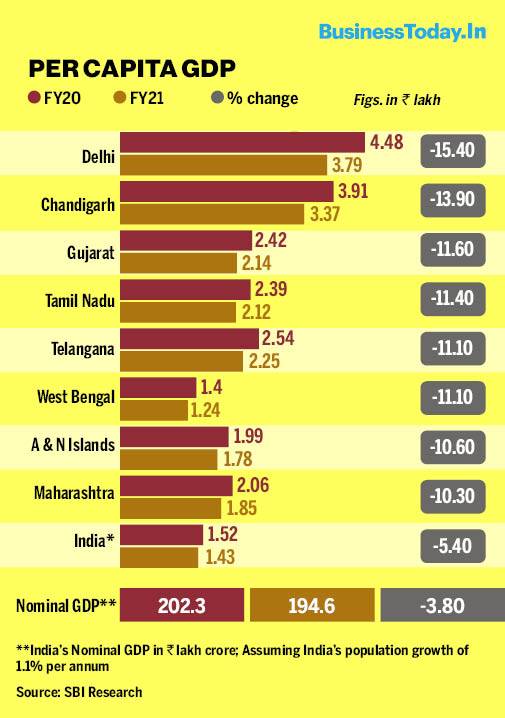 These states and Union Territories are the urban areas (and red zones also) where coronavirus lockdown was implemented most severely. The closure of markets, shopping complexes and malls adversely affected income in these areas, the report said. Even after opening of markets (in staggered manner), the number of customers is still 70-80% less than the normal times, it added.

States like Maharashtra, Gujarat, Telangana, and Tamil Nadu are expected to witness a decline of 10-12% in PCI in FY21.

However, in the relatively less well off states like Madhya Pradesh, UP, Bihar, Odisha, etc. (where per capita income is below the national average) the decline in PCI is expected to be less than 8%. This was attributed to larger number of green zones, prominence of agricultural activity and already low levels of income.

SBI forecasted that India's GDP will decline by 6.8% in FY21, while it expects a 'statistical V-shaped recovery / Swoosh' in FY22 primarily due to the favourable base effect. "Beyond such base effect, it would however take at least till FY24, if India replicates the best case example in history, if not more before India gets back to pre-pandemic level growth rate," the report added.

COVID-19 pandemic has sent GDP growth of most countries in contraction mode at least for FY21. Globally, a 6.2% decline in per capita GDP has been pegged for 2020, which is significantly greater than the 5.2% fall in global GDP, says SBI report.