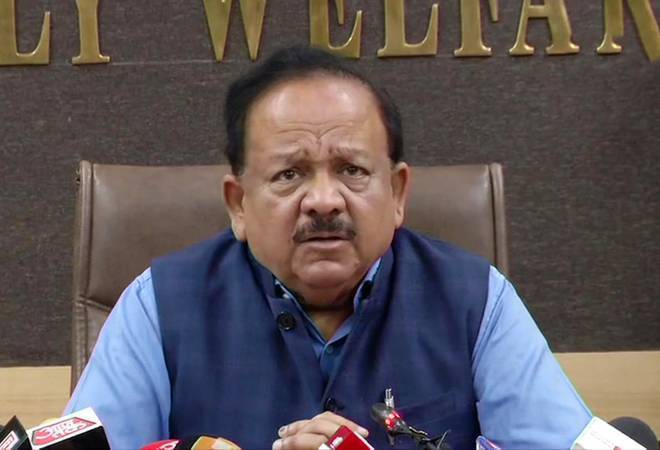 Union Health Minister Harsh Vardhan on Saturday stressed the need for an expeditious COVID-19 vaccination drive to cover the entire target population estimated to be around 30 crore. Vardhan was speaking while chairing the 22nd meeting of the high-level Group of Ministers (GoM) on COVID-19 through video-conferencing on Saturday.

"India's COVID 19 pandemic growth has dropped to 2 per cent and case fatality rate is among the lowest in the world at 1.45 per cent," Vardhan said.

"India's Recovery Rate has peaked to 95.46 per cent while the strategy of testing one million samples has decreased the Cumulative Positivity Rate to 6.25 per cent," he added.

Observing that despite festivals in October and November, no new surge in cases was observed due to comprehensive testing, tracking and treatment policy implemented on the ground, Vardhan appealed to people to diligently maintain COVID-appropriate behaviour even at a time when the country is at the cusp of authorizing the first set of vaccines, a Union Health Ministry statement said.

He also expressed the need for an expeditious vaccination drive to cover all the target populations estimated to be around 30 crores, it added.

He showed figures related to number of cases, number of deaths, their growth rate and how they compared favourably to the rest of the world which is witnessing a meteoric rise in these parameters, the statement said.

He also presented a granular analysis of the trajectory of the pandemic in each state, pointing out critical parameters like positivity, RAT and RT-PCR percent breakup, concentration of cases in particular districts and other trends like fatality and fatality within 48 and 72 hours of hospitalization, the statement said.

He also presented data on the total dedicated COVID-19 facilities in the country, according to which a total of 15,359 such facilities, over 15 lakh isolation beds, 2.70 lakh oxygen supported beds, 80,727 ICU beds and 40,575 ventilators were present.

Through a detailed presentation, Paul apprised the GoM on three critical aspects of vaccination -- the process of pre-clinical and clinical trial of all vaccines, the details of the six vaccine candidates undergoing trial in India (in terms of composition, manufacturers and technical partners, numbers of doses, conditions for storage and efficacy) and the composition of target populations in India, in terms of age, occupation and comorbidities and how they compare with other countries and WHO's recommendations, it said.

He also briefed the GoM about requests for vaccines received by the Ministry of External Affairs from 12 other countries.

Union Health Secretary Rajesh Bhushan noted the importance of Health Seeking Behaviour among the population as a key driver in checking fatality.

Explaining the paradox of some States/UTs reporting very high cases but minimal fatalities while others reporting low cases but comparatively high fatalities, he said this phenomenon results from people not coming forward for testing even if they are symptomatic in the second category of states.