COVID-19: 100 more hospitals to get own oxygen plant under PM-CARES Fund

Medical oxygen sources have been mapped for 12 high-burden states and 50,000 MT of medical oxygen would be imported to deal with the increased demand. 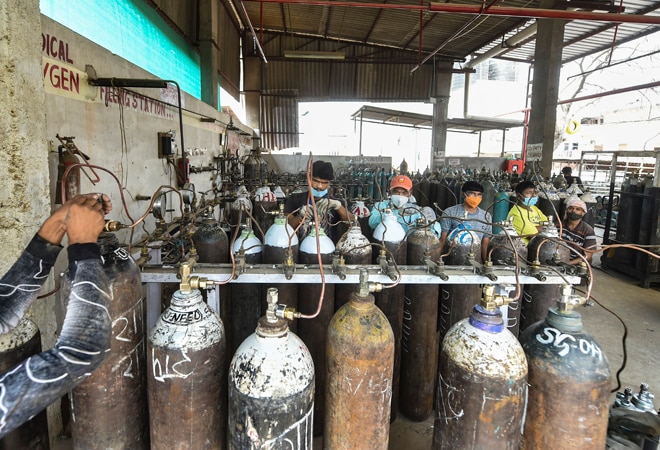 162 PSA plants have already been sanctioned under PM-CARES Fund to enhance self-generation of oxygen.

Amid concerns over shortage of medical oxygen as coronavirus wreaks havoc in the country, the Centre on Thursday directed the Ministry of Health and Family Welfare (MoHFW) to identify 100 more hospitals in far flung locations for sanctioning money from PM-CARES Fund for installation of their own oxygen plants.

Besides, medical oxygen sources have been mapped for 12 high-burden states and 50,000 MT of medical oxygen would be imported to deal with the increased demand.

A meeting of inter-ministerial Empowered Group (EG2), consisting of senior officers from various ministries, was held on Thursday to review the availability of essential medical equipment and oxygen, the Health Ministry said in a release.

The EG2 directed Health Ministry to identify 100 hospitals in far flung locations for consideration of sanction under PM-CARES Fund for installation of Pressure Swing Adsorption (PSA) plants, which manufacture oxygen and help hospitals become self-sufficient in their requirement for medical oxygen while also reducing the burden on the national grid for supply of oxygen.

The Prime Minister's Citizen Assistance and Relief in Emergency Situations Fund (PM-CARES Fund) was set up on March 27, 2020 after the outbreak of COVID-19 pandemic with the primary objective of dealing with any kind of emergency or distress situation and to provide relief to the affected.

The ministry said 162 PSA plants have already been sanctioned under the fund and are being closely reviewed for early completion of 100 per cent of the plants to enhance self-generation of oxygen.

While the demand in Maharashtra is expected to increase beyond available production capacity of the state, states like Madhya Pradesh do not have any production capacity to meet their demand for medical oxygen. Besides, there is a trend of increasing demand in other oxygen producing states such as Gujarat, Karnataka, Rajasthan, among others.

"Accordingly, 4,880 MT, 5,619 MT and 6,593 MT have been indicated to these 12 states for meeting their projected demand as on 20th April, 25th April and 30th April, respectively. MoHFW is issuing orders in this regard and the same would be notified by the Ministry of Home Affairs," the release said.

Also read: Why is Citibank exiting consumer business in India?