The social sector spends of the government include expenses related to education, public health, family welfare, sanitation, urban development and other social services According to the government data, the state's capex on social services stood at Rs 2,417 crore up to June 2020 which was 27 per cent of the budgeted amount. During April-June 2019, the expenditure under this head stood at Rs 303.4 crore which was just 4 per cent of what was pegged and was Rs 1,431.5 crore in the comparable period of the previous fiscal. Overall, its social sector spends (including revenue expenses) with a share of almost 50 per cent in the total budgeted expenditure for FY21 jumped substantially by 83 per cent. The government has mopped up almost 12 per cent of budgeted tax revenues in the first quarter of FY21 compared to 10 per cent in the matching period last year.

The social sector spends of the government include expenses related to education, public health, family welfare, sanitation, urban development and other social services.

As on June 30, AP had the eleventh highest number of coronavirus cases in the country while the other three southern states Tamil Nadu, Telangana and Karnataka took the second, eighth and nineth spot, respectively. With addition of over 3 lakhs cases since then, AP crossed Delhi to become the third worst hit state while Tamil Nadu retained its grim position. Currently, the top ten states, led by Maharashtra, contribute 80 per cent to overall cases.

Meanwhile, in the top ten, the Q1FY21 spending data for only Telangana and Karnataka is available till date. Telangana government managed to spend only 3.4 per cent of the budgeted capex on social services compared to 21.7 per cent while the total spends under this head was around 15 per cent compared to nearly 19 per cent last year. Going by this yardstick, its tax revenue was lower by 8.2 percentage points. Karnataka on the other hand, spent Rs 175.5 crore against Rs 433 crore in FY20. However, these spends jumped almost 4.4 times to Rs 776 crore by July. The state has managed to collect nearly 21 per cent of the budgeted tax amount against 29.3 per cent last year. In the wake of this pandemic and a series of lockdowns, both Centre and states are struggling to make ends meet. 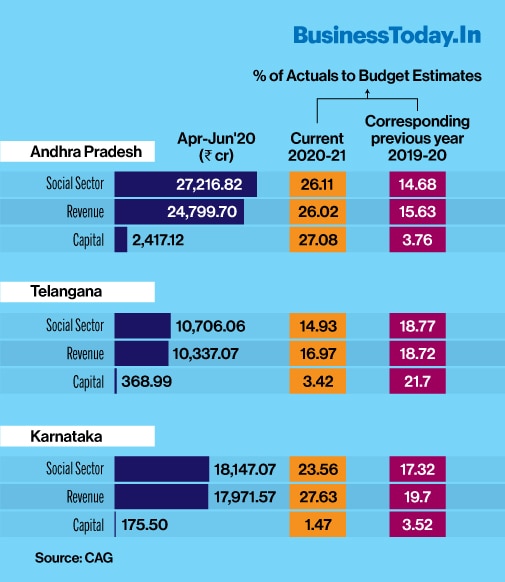