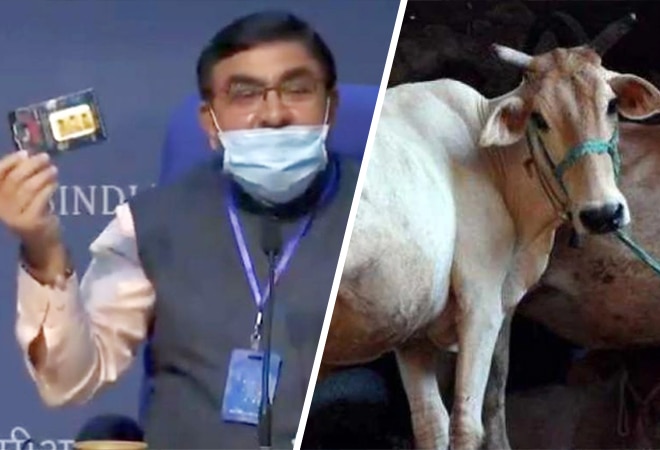 Rashtriya Kamdhenu Aayog (RKA) chairman Vallabhbhai Kathiria on Monday unveiled a chip made of cow dung claiming that cow dung serves anti-radiation purpose. He added that cow dung has the ability to safeguard everyone against deleterious diseases since it is 'anti-radiation'.

Addressing a press conference, Kathiria added that cow dung can counter and reduce radiation, which has been proven scientifically.

Listing the qualities of cow dung, he also unveiled a chip developed from it claiming that it lessens radiation from mobile phones thus protecting against diseases.

Kathiria made these remarks at the launch of a nationwide campaign 'Kamdhenu Deepawali Abhiyan', aimed at promoting cow dung products.

"Cow dung will protect everyone, it is anti-radiation. It has been proven scientifically. Keeping cow dung products in the house protects people from radiation," he said while addressing the conference.

#WATCH: Cow dung will protect everyone, it is anti-radiation... It's scientifically proven...This is a radiation chip that can be used in mobile phones to reduce radiation. It'll be safeguard against diseases: Rashtriya Kamdhenu Aayog Chairman Vallabhbhai Kathiria (12.10.2020) pic.twitter.com/bgr9WZPUxK

Kathiria went on to display a chip developed with cow dung and said "this is a radiation chip that can be used in mobile phones to reduce radiation. It'll safeguard against diseases if kept in phones."

He then also alluded to actor Akshay Kumar's recent claims that consuming cow urine has health benefits, adding that the actor has also eaten cow dung.

Rashtriya Kamdhenu Aayog is an institute that falls under the Department of Animal Husbandry and Dairying. The body was established as an attempt to conserve and safeguard India's cattle population.

The cow dung chip has been named 'Gausatva Kavach' and has been developed by a Gujarat-based gaushala.

Launching the chip on Monday, October 12, Kathiria stated that it should be used in mobile phones if people want to prevent diseases caused by radiation.