As crude oil rises above $65 a barrel on the back of oil production cuts, retail consumers can expect to pay an even higher price than what they are currently used to The last time India's crude oil basket was above 60-dollars-a-barrel was in December 2014. As crude oil rose above $65 a barrel, Indian vehicle owners can expect to pay more as retail crude oil prices may soon cross the Rs 80-a-litre mark.

Already, retail inflation has hit a 15-month high, at 4.9 per cent while the Asian Development Bank (ADB) has lowered India's GDP growth rate by 0.3 percentage points, to 6.7 per cent from 7 per cent earlier.

Crude oil prices, which were in a decline in the first quarter of FY18, have now spiked up again and are now higher by almost 17 per cent since April this year.

Retail petrol price, since daily price revision was introduced, shot up by Rs 2.88 before declining to Rs 69.07 on Wednesday, in Delhi, where fuel prices are the cheapest among the metros.

Mumbai pays the highest retail price for petrol among metros, at Rs 76.66 per litre. 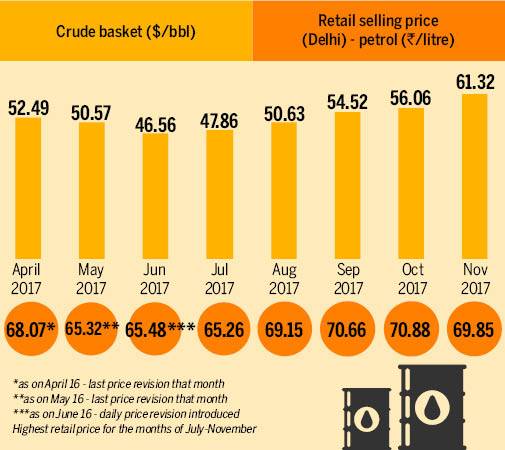 India's crude oil basket increased nearly five times in 10 years, since the start of the 21st century, before tapering off to less than $50-a-barrel last fiscal. Dealer commission, too, has been on an upward curve, increasing nearly 38 per cent since April. Dealer commission currently constitutes a little over five per cent of the retail selling price of petrol. Much of the heartache retail consumers experience in petrol price hikes is due to taxes & commissions, which comprise more than 49 per cent of the retail price. 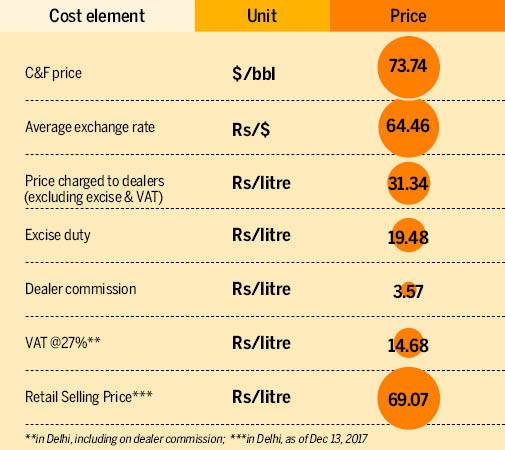 In the SAARC region, India has the second highest retail price for petrol, after Bangladesh.