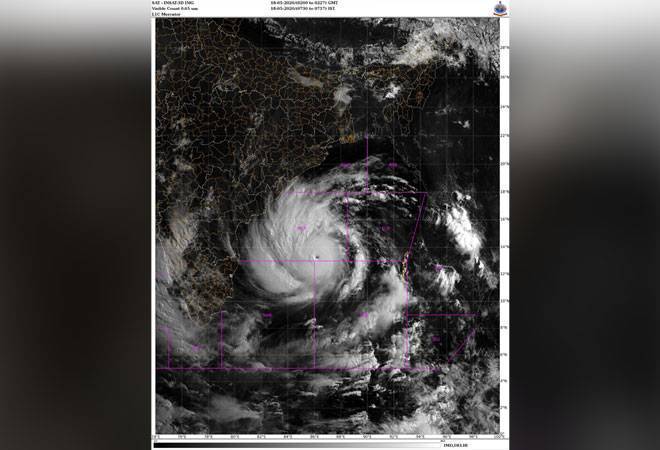 At least 19 million children in parts of Bangladesh and India are at "imminent risk" from flash flooding and heavy rain as Cyclone Amphan makes landfall and the state of West Bengal is expected to take a direct hit from the powerful storm, the UN's children agency has warned.

The extremely severe cyclonic storm Amphan made a landfall at Digha in West Bengal and Bangladesh on Wednesday, leaving a trail of destruction. At least three persons were killed in India and seven in Bangladesh. The UNICEF said that at least 19 million children in parts of Bangladesh and India are at imminent risk from flash flooding, storm surges and heavy rain as Cyclone Amphan makes landfall.

West Bengal, home to more than 50 million people, including over 16 million children, is expected to take a direct hit from the powerful storm, the UN agency said in a statement on Wednesday. The UNICEF said it is also very concerned that the COVID-19 could deepen the humanitarian consequences of Cyclone Amphan in both the countries. Evacuees who have moved to crowded temporary shelters would be especially vulnerable to the spread of respiratory diseases like COVID-19, as well as other infections.

We continue to monitor the situation closely, said UNICEF Regional Director for South Asia Jean Gough. The safety of children and their families in the areas that will be impacted is a priority and it is good to see that the authorities have planned their urgent response factoring in the on-going COVID-19 pandemic.

Across the region, the UNICEF is working closely with the governments of Bangladesh and India and stands ready to support humanitarian operations to reach children and families affected by Cyclone Amphan. Based on the storm's current trajectory, Cox's Bazar in Bangladesh now sheltering over 850,000 Rohingya refugees is likely to experience high winds and heavy rains which may cause damage to homes and shelters in the refugee camps and Bangladeshi communities. This population is already highly vulnerable and cases of COVID-19 have recently been confirmed in the camps and host communities.

The UNICEF said it is working with the Deputy Commissioner's Office in Cox's Bazar, the Office of the Refugee Relief and Repatriation Commissioner, and humanitarian partners to help ensure Bangladeshi and Rohingya children and families remain protected. These efforts include raising awareness among Rohingya and Bangladeshi communities on cyclone preparedness and prepositioning emergency life-saving water, sanitation, hygiene and medical supplies to meet immediate humanitarian needs.

Meanwhile, UN Secretary General Antonio Guterres' spokesperson Stephane Dujarric said at the daily press briefing that UN teams on the ground continue to work with the Government of Bangladesh to prepare and support those in need in the wake of the cyclone. Given the current pandemic, this support includes distributing personal protective equipment, disinfectants and other materials to evacuation shelters. To reduce the person-to-person contact during the delivery of aid, e-cash distributions will be used, he said adding that the UN along with its partners is mobilising more than 1,700 mobile health teams and preparing for emergency food deliveries.