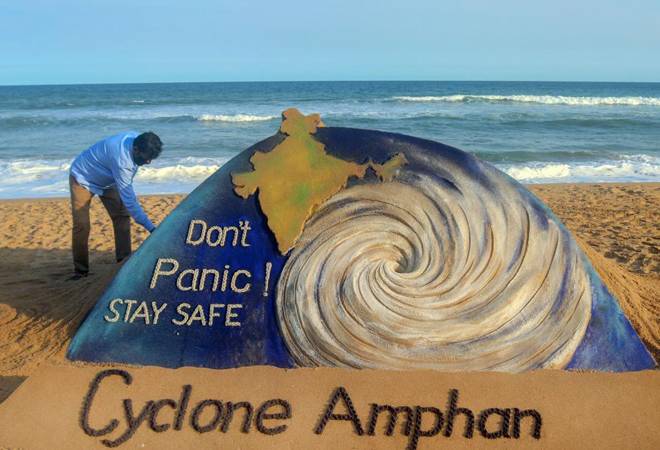 Indian Meteorological Department (IMD) has said that cyclone Amphan is expected to make landfall between Digha in West Bengal and Hatiya Islands near Sunderbans, and south of Paradip in Odisha on May 20. Howrah Municipal Corporation has released a 24x7 helpline number, 033-2637-1735 for all those people who are stranded or have family members who are stranded in the midst of this natural disaster.

Apart from this, Howrah Municipal Corporation has set up 24x7 control rooms at all borough offices and bally sub-offices. State and National Disaster Management teams have been deployed at the spot. The National Disaster Response Force (NDRF) has deployed 37 teams in the coastal areas of two states, i.e, West Bengal and Odisha.

According to Odisha Special relief commissioner Pratap Jena, cyclone situation is in control so far and the state government is taking all the required precautions. Jena further added that district administrations have started evacuation process from in coastal districts. Evacuation process in coastal areas is expected to be completed by today evening.

The IMD, however, has issued a heavy rainfall forecast for Odisha, West Bengal, sub- Himalayan West Bengal and Sikkim, Assam and Meghalaya till May 21 in the midst of the extremely severe cyclonic storm Amphan.

Meanwhile, Congress leader Rahul Gandhi tweeted, "Amphan storm is coming in the country amidst corona crisis. I appeal to all Congress workers in West Bengal and Odisha to warn people of danger around them and help to bring people to safer places. You all be safe." West Bengal Chief Minister Mamata Banerjee said that NDRF and SDRF personnel were ready to evacuate those who will be hit by the cyclone. Odisha Chief Minister Naveen Patnaik has already set a target of ensuring zero casualties.

Trump tells WHO to prove 'independence' from China within 30 days; warns freeze on funding