Data fudging: Dressing up GDP and budget numbers does no good to economy

From suppression of key statistics to revision of GDP numbers and fiddling with budget numbers, the Central government's data management has come under sharp attacks of economists and social scientists in recent times, and rightly so. Economic statistics are vital to public debate and policy making. The second part of the two-part series looks at how GDP and budget numbers give a misleading picture of the state of economy. The repeatedly revised GDP numbers have led to questions from economists and social scientists from all over the world.

Strangely, no back series data was released then but it was later learnt that the Niti Aayog did not allow the release of back series data worked out by the Central Statistical Organisation (CSO) then as it had led to an upward revision in growth for the UPA years.

Then in 2018, two back series data came to public domain, one prepared by a committee of the National Statistical Commission (NSC) and later, another one by the CSO. The NSC's back series data was rejected by the Niti Aayog, for it too showed a higher growth rate during the UPA (2004-14) years. The Niti Aayog, which has no expertise in such matters, then adopted the CSO numbers which trimmed the growth rate of the UPA era substantially.

What emerged from this is best represented by the following graph that the government released. Many eye brows have been raised, including from the 108 economists and social scientists from all over the world who said "these revised estimates were surprising as they did not square with related macro-aggregates..."

We take a look at some such indicators.

The high growth that the new GDP series threw up for the NDA II years (2014-19) is, in fact, contradicted by other macro-economic indicators like growth in capital formation as percentage of GDP, bank credit to non-food sector, industrial production and non-oil trade.

(i) Investment rate has fallen in NDA II years

The growth in investment rate, calculated as percentage of gross fixed capital formation (GFCF) to GDP, shows that it was markedly higher during the UPA I (2004-09) and UPA II (2009-14) years - reaching a peak at 34.7% in 2008-09 to decline to 28-29% in the NDA II years. The following table traces the investment rate from the data released by the National Accounts Statistics 2018, CSO's final GDP back series report and the Second Advance and Quarterly Estimates of GDP for the Third Quarter of 2018-19 released in Feb 2019. 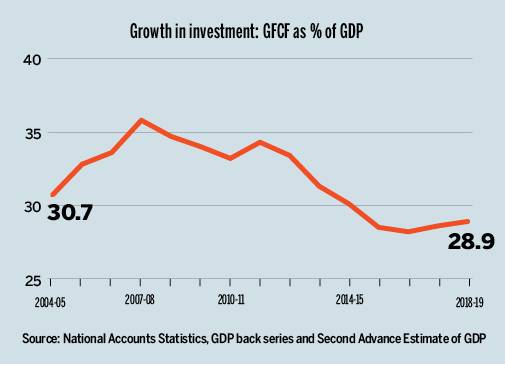 Growth in bank credit to non-food sector, which includes credit to agriculture and allied activities, industry, services and personal loans also shows a clear disconnect with the new GDP series. From a high of 25% in 2008, growth of bank credit has fallen to a single digit growth since 2015. 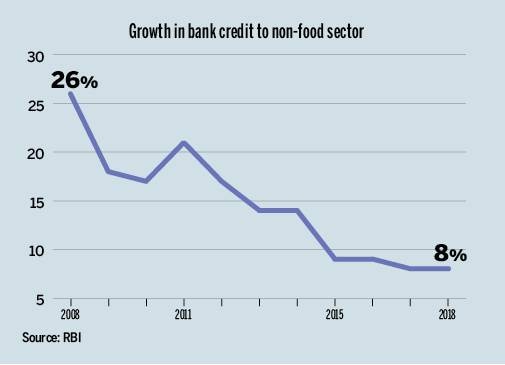 A slowdown in industrial growth that began post 2007-08, continues.  Growth in the Index of Industrial Production (IIP) under different series below shows a sharp difference between the new IIP series and the GDP series, indicating the problem with the new GDP numbers. 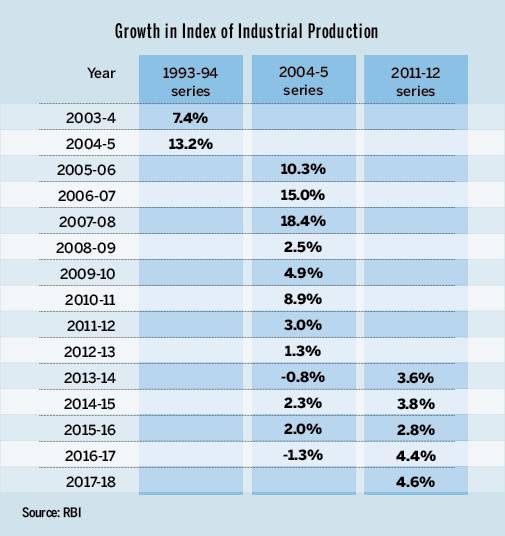 The growth rate in non-oil export has been much higher during the period of 2004-05 to 2011-12 (using RBI's data in US dollar), after which it has remained in single digit, contradicting a higher GDP numbers during the later period. 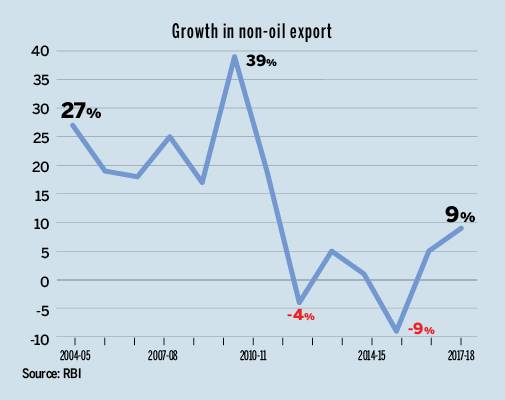 Many experts like economist and author Vivek Kaul have shown that the annual growth of other economic indicators which reflect the performance of different parts of the economy - like auto sales, corporate tax, personal income tax etc. - was much better between 2004-05 and 2011-2012 than it was between 2011-2012 and 2017-2018. Hence, arguing that the GDP growth should be higher during 2004-05 to 2011-12, not the other way round.

Fiddling with data is not restricted to GDP. The budget numbers have also come under sharp attack from economists. The CAG's FRMB report for 2016-17 (No 20 of 2018) is highly critical of the continuation of off-budeting practices which suppresses budget deficit numbers.

It goes on to say that off-budget financing route is outside the parliamentary control and has implications for fiscal indicators since it understates the government's expenditure.

It gives a few startling examples:

Such window dressing of vital statistics does no good to the economy. It only helps in diverting attention from real issues to the trivial ones while the condition of economy goes from bad to worse. The sooner the government realises this the better it is for the very people it claims to serve.

ALSO READ:Data fudging: No data on unemployment means no attention, no remedy