EVM tampering: Senior AAP leader and Rajya Sabha MP Sanjay Singh tweeted a couple of videos, alleging that efforts are being made to tamper with the EVM from the assembly elections 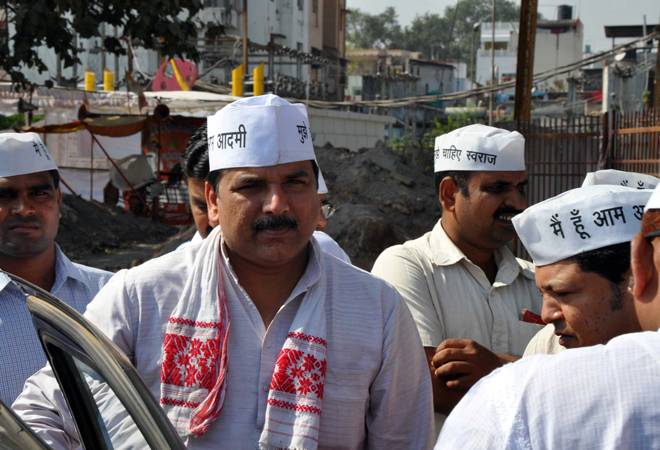 Delhi Election 2020: Senior AAP leader Sanjay Singh shared a video which showed that voting machines were carried across a street without Police

A day after Delhi assembly elections, Arvind Kejriwal's Aam Aadmi Party (AAP) has re-ignited the Electronic Voter Machine (EVM) tampering debate on Twitter, citing videos to back their claim. It all began after senior AAP leader and Rajya Sabha MP Sanjay Singh tweeted a couple of videos, alleging that efforts are being made to tamper with the EVM from the assembly elections. He shared a video which showed that voting machines were carried across a street without the Police force.

"Does the reserve (forces) not go with the EVM? This official was caught with an EVM by people at Saraswati Vidya Niketan School in Babarpur assembly constituency," read the tweet with one of the videos.

He said that the Election Commission should probe where these EVMs are being taken as there were no centres nearby.

"Information has been received that officials are trying to take away EVMs at several places in an unauthorised manner. The EVMs should have been sealed and have gone straight to strong rooms. How are these machines with the officials?" news agency ANI quoted Sanjay Singh as saying.

Delhi Chief Minister Arvind Kejriwal also expressed fear over tampering with the EVM. He said today it's shocking that the Election Commission has not released the figures of voters turnout yet.

Absolutely shocking. What is EC doing? Why are they not releasing poll turnout figures, several hours after polling? https://t.co/ko1m5YqlSx

"Absolutely shocking. What is EC doing? Why are they not releasing poll turnout figures, several hours after polling?," said Kejriwal in a tweet.

EVM tampering has been a contentious issue for AAP, since the Lok Sabha elections of 2014 and 2019.

Several exit polls predict Delhi Chief Minister Arvind Kejriwal returning to the power for a third term with the Aam Aadmi Party (AAP) likely to secure over two-thirds majority. India Today-Axis My India exit poll predicts a landslide victory for Aam Admi Party in 2020 Delhi Assembly elections. The Arvind Kejriwal-led party is expected to win 59-68 seats, the survey predicts. Meanwhile, BJP will once again remain a distant second with only 2-11 seats. Congress will not be able to win any seats, the exit poll suggests.

Meanwhile, the BJP dismissed the exit polls with the party's state unit chief Manoj Tiwari claiming that all exit polls will be proved wrong on the result day, February 11. Home Minister Amit Shah also held a meeting of Bharatiya Janata Party (BJP) MPs this evening after exit polls predicted a dismal performance by the national party. The meeting was attended by the party's national chief JP Nadda, along with other party leaders including Vijay Goel, Prakash Javadekar, Hardeep Singh and Nityanand Rai.

The counting of the votes polled in all the 70 Assembly constituencies in Delhi will happen on February 11 and the result of Delhi polls 2020 will also be announced on the same day.

The voter turnout in a single-phased Delhi poll, which started at 8 am today, was low as compared to previous Assembly election.  Over 61 per cent of the enlisted voters exercised their franchise on Saturday.  In 2015, Delhi's overall voter turnout was 67.47 per cent.