Delhi Election Exit Polls 2020: Almost, every exit poll signalled that Kejriwal remained the most preferred choice as the Chief Minister of Delhi 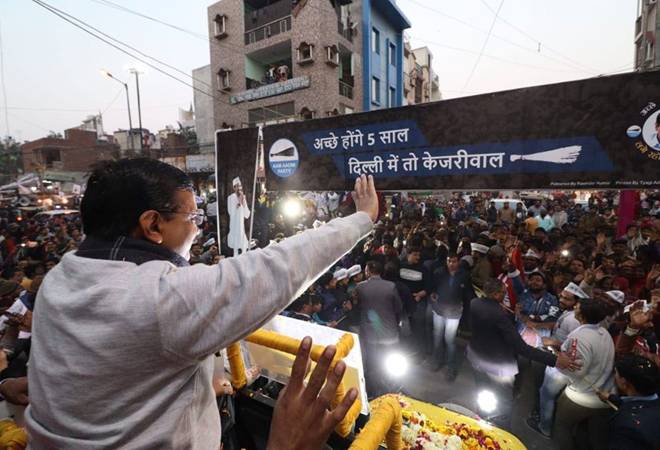 Delhi Election Exit Polls 2020:  Arvind Kejriwal's Aam Aadmi Party (AAP) is set to sweep Delhi elections for the third time, according to exit polls. Six exit polls have predicted that AAP will be winning more than 50 seats in 2020 Delhi Assembly elections. The final result of Delhi Election 2020 will be out on February 11, Tuesday.

The exit polls, conducted by India Today-Axis My India, Times Now-IPSOS, Republic-Jan Ki Baat, ABP News, NEWSx and TV9 Bharatvarsh, predicted that AAP is likely to secure over two-thirds majority in Delhi Assembly Elections 2020. Almost, every exit poll signalled that Kejriwal remained the most preferred choice as the Chief Minister of Delhi.

According to India Today-Axis My India survey, the Arvind Kejriwal-led party is expected to win 59-68 seats in the Delhi Assembly elections 2020. Meanwhile, BJP will once again remain a distant second with only 2-11 seats.  The exit poll also predicted that about 48 per cent voters shifted from the BJP to AAP, since General Election 2019. The 48 per cent voters comprise a large chunk of the lower and lower-middle-class, segment, the survey said.

On the other hand, ABP-C Voter exit poll forecast AAP winning 49-63 seats, whereas BJP is likely to get 5-19 seats and NewsX-Polstrat suggests AAP could win 50-56 seats and BJP 10-14 seats.

The half-way mark for forming government in Delhi is 36.

If the predictions of the poll of polls hold true on February 11, the AAP party will be in a comfortable position to form the next government in Delhi. However, this time it is likely to win fewer seats than it won in 2015.

One thing common in all the exit poll is that Congress is all set to be once again routed in Delhi, which ruled Delhi for three terms between 1998 and 2013.

Delhi is the fourth state to go to polls after the 2019 Lok Sabha election. Maharashtra, Haryana and Jharkhand were the other three states, where Vidhan Sabha elections took place post-2019 general election. All of them were previously ruled by the BJP but the BJP is presently in power only in Haryana, that too with the help of the Jannayak Janata Party.