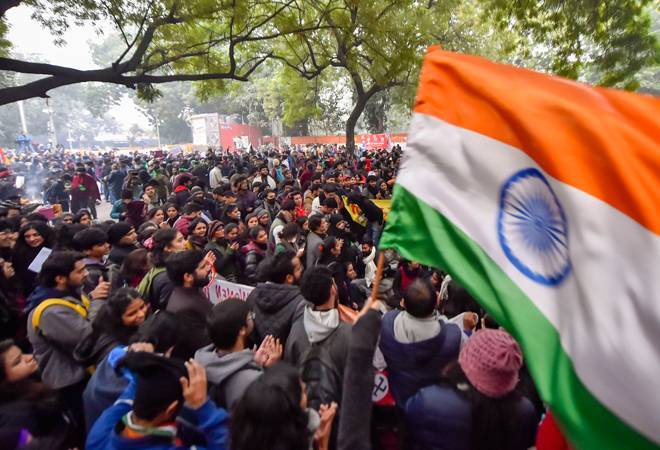 There were protests against the Citizenship Amendment Act (CAA) on December 19.

The Delhi High Court on December 24 dismissed a plea which alleged that telecom services were disrupted in various parts of the national capital during the anti-citizenship law protests in violation of rules.

A bench of Chief Justice D N Patel and Justice C Hari Shankar declined to entertain the PIL after Additional Solicitor General (ASG) Sanjay Jain, appearing for the Centre, told the court the disruption was only for four hours on December 19 and was no longer in effect.

There were protests against the Citizenship Amendment Act (CAA) on December 19.

ASG Jain further said no rules were violated in issuance of the direction for prohibition of telecom services as contended by the petitioner society, SFLC.IN.

The court, while declining to entertain the matter, said the society or anyone affected by the prohibition of telecom services can file a suit for damages if they have suffered any loss due to the disruption.

The petition contended that the order for prohibition of telecom services in Delhi was issued by a Deputy Commissioner of Police and not the Secretary, Ministry of Home Affairs (MHA) who is the competent authority to issue such a direction under the relevant rules.

SFLC.IN, which claims to work for the promotion and protection of digital rights and freedoms, in its petition said the direction issued by the police to prohibit telecom services in the city was in violation of the Temporary Suspension of Telecom Services (Public Emergency or Public Safety) Rules, 2017.

It contended that telecom service suspensions ordered for reasons like preventing peaceful protests are not reasonable restrictions under the Constitution of India.

It also claimed that "right to access the internet is a part of right to education and right to privacy".

"Thus, when students rely on the internet for accessing educational resources and when citizens rely on this medium for private communications, the shutdown of internet services will be violative of their fundamental rights to education and right to privacy," it argued.