The sharp-tongued, quick witted Karunanidhi was a five-time chief minister, who wielded considerable influence beyond his own state, in the corridors of power in New Delhi, for a long time. Ailing DMK chief M Karunanidhi passed away on Tuesday after his health deteriorated significantly, the Kauvery Hospital authorities said. The DMK patriarch was admitted to the hospital on July 28 after his blood pressure declined.

Earlier during the day, the hospital authorities said: "There has been a significant decline in the clinical condition of Kalaignar M Karunanidhi over the past few hours." Karunanidhi's vital organ functions continued to deteriorate for the past few days, including altered liver and haematological parameters. The 94-year-old five-time chief minister of the southern state of Tamil Nadu was being continuously monitored and treated with active medical support.

One of the most charismatic figures of Tamil Nadu politics whose public life spanned over seven decades, is survived by two wives and six children, including DMK working president and heir apparent M K Stalin and daughter Kanimozhi, a Rajya Sabha MP. The most enduring mascot of the Dravidian movement breathed his last at 6.10 pm.

Karunanidhi's death comes barely 20 months after that of J Jayalalithaa, his long-time political foe and another bright star that faded from Tamil Nadu's political firmament on December 5, 2016.

The sharp-tongued, quick witted Karunanidhi was a five-time chief minister, who wielded considerable influence beyond his own state, in the corridors of power in New Delhi, for a long time, sewing up alliances with both the Congress and the BJP.

Telangana Chief Minister K Chandrasekhar Rao condoled the death of the DMK president, saying the demise of the veteran leader is a great loss to the country's politics.

7.45pm: PDP leader Mehbooba Mufti says Karunanidhi was an extraordinary politician with rare political acumen and administrative skills, which made him a distinct leader not only in the state of Tamil Nadu but in Indian politics too.

Deeply saddened to hear of the passing away of Shree Karunanidhi. He was an extraordinary politician with rare political acumen & administrative skills which made him a distinct leader not only in the state of Tamil Nadu but in Indian politics too. 1/2

7.26pm: BJP leader Nitin Gadkari and Shivraj Singh Chouhan also paid respects to the DMK patriarch. "Saddened to know about the demise of Thiru M Karunanidhi. May His soul rest in peace. My deepest condolences to the people of Tamil Nadu," says Gadkari.

7.25pm: President Ram Nath Kovind gives condolences to the family and his millions of well-wishers.

Extremely sad to learn of the passing of Thiru M. Karunanidhi. A doyen of our public life, as a contributor to the development of Tamil Nadu and of India he has few peers. Our country is poorer today. My condolences to his family and millions of well-wishers #PresidentKovind

News has just come in of the passing of Kalaignar Muthuvel Karunanidhi, a giant of Indian politics as CM of Tamil Nadu & a screenplay writer who gave voice to the Dravidian movement through his immortal dialogues. Tamil politics can never be the same again. RIP.

7.14pm: Kalaignar Karunanidhi stood for regional aspirations as well as national progress. He was steadfastly committed to the welfare of Tamils and ensured that Tamil Nadu's voice was effectively heard, says PM Modi.

I have had the opportunity of interacting with Karunanidhi Ji on several occasions. His understanding of policy and emphasis on social welfare stood out. Firmly committed to democratic ideals, his strong opposition to the Emergency will always be remembered. pic.twitter.com/cbMiMPRy7l

Deeply saddened by the passing away of Kalaignar Karunanidhi. He was one of the senior most leaders of India.

We have lost a deep-rooted mass leader, prolific thinker, accomplished writer and a stalwart whose life was devoted to the welfare of the poor and the marginalised. pic.twitter.com/jOZ3BOIZMj

Doctors had said on Monday that the next 24 hours would be crucial for his health and that keeping his vital organs functioning had been a "challenge". 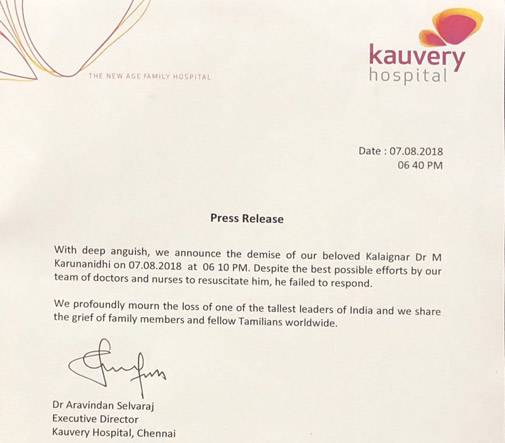 "There has been a decline in the medical condition of DMK president and former Chief Minister M Karunanidhi. Maintaining his vital organ functions continues to remain a challenge considering his age-related ailments. His response to the medical interventions over the next 24 hours will determine the prognosis," Executive Director of the Hospital, Dr Aravindan Selvaraj, had said in a press release.

His son and DMK working president MK Stalin called on Chief Minister K Palaniswami on Tuesday and apprised him about his father's declining health. Meanwhile, a general alert has been sounded across the state, and the security has been stepped up at major installations, including the Gopalapuram residence of the nonagenarian leader.