The fate of 1,821 candidates, including 135 women who contested from India's youngest state Telangana's will be decided today 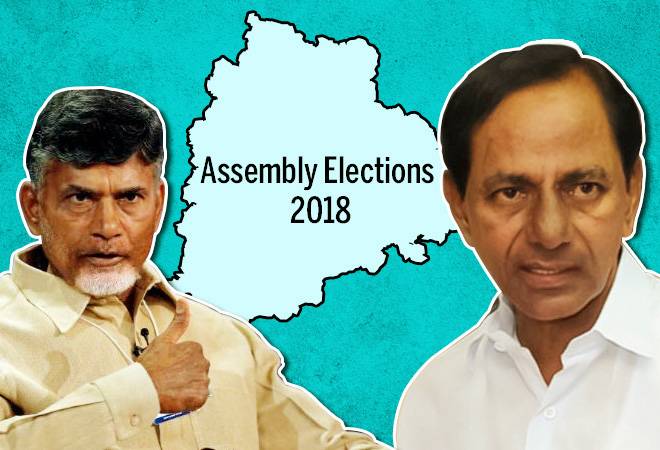 The Congress-led alliance is a distant second as Telangana Rashtra Samithi (TRS) races ahead as per early trends. CVoter had earlier predicted such a scenario where the two would be battling it out. While the gap between the two is significant, these are still early trends. TRS is shooting for the top with a lead of 77 seats, while Congress is a far second with 28 seats. BJP is leading in 2 seats, while others are leading in 4.

K Chandrasekhar Rao is leading from Gajwel against Vanteru Pratap Reddy of Congress.

The fate of 1,821 candidates, including 135 women who contested from India's youngest state Telangana's will be decided today. The elections were held on December 7 after the state's legislative assembly was dissolved in September, before the end of its term, giving way to the early elections.

The important players in the state of Telangana are KCR-led TRS, the Congress-led four-party People's Front, BJP and MIM. Most of the 119 constituencies will see a triangular contest between TRS, People's Front and BJP. The Bahujan Left Front (BLD) led by the Communist Party of India Marxist and Bahujan Samaj Party (BSP) are also contesting.

Some of the big names to look out for in Telangana today are:

K Chandrashekar Rao (KCR), Gajwel seat: The Gajwel seat is KCR's home ground which was divided between the talks of development by the ruling TRS and oppositions' allegations of an "unreachable" CM. KCR would be looking for re-election from Gajwel today - a seat he won with a margin of nearly 20,000 votes in 2014. Congress and BJP had fielded Vanteru Pratap Reddy and Akula Vijaya from Gajwel respectively. V Reddy would be hoping to turn the tide and would hope to give KCR a tough fight.

Revanth Reddy, Kodangal seat: Reddy is a Congressman and is backed by Chandrababu Naidu's TDP. The TRS' Patnam Narender Reddy and BJP's N Namaji are other two important candidates from here.

KT Rama Rao, Sirsilla seat: KT Rama Rao will be hoping to get re-elected today. He is the caretaker IT and Industries minister in the KCR government and son of TRS president. On the other hand, Congress' Mahender Reddy is a popular leader who was at the forefront of the Telangana movement.

In Telangana, exit polls show Telangana Rashtra Samithi (TRS) chief KCR's gamble of dissolving the state assembly paying off. The TRS will get 65-90 of the state's 119 assembly seats, where the majority mark is at 61. The Congress-Chandrababu Naidu combine will get approximately 35 seats and the BJP 3-5 seats.

In 2013, when the state was formed, the TRS won a simple majority in the House winning 63 seats, while the Congress won only 21. Meanwhile, the TDP and the BJP won 15 and 5 seats respectively, while the MIM won its traditional strongholds in 7 seats.