Farmers' protest: Delhi Police Commissioner said that farmers have not given their final route for the rally in written form and that they will comment on it once they receive it in writing 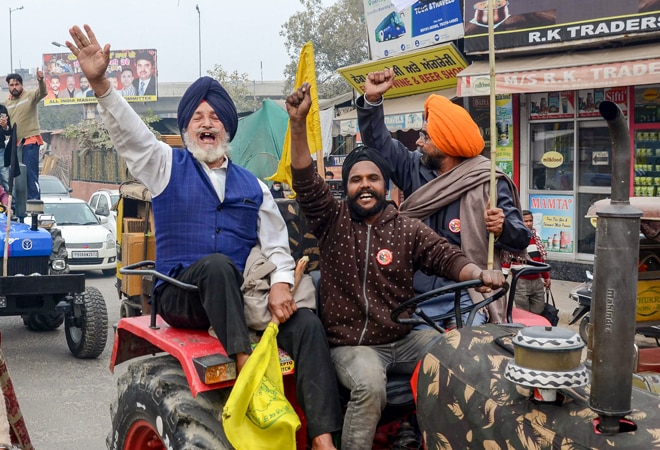 Farmers' unions that have been protesting against the farm laws said on Saturday that they have reached a breakthrough with Delhi, Haryana and Uttar Pradesh police over the proposed tractor march on Republic Day. Samyukta Kisan Morcha said that their leaders were able to jointly finalise routes for the Kisan Republic Day parade. "Preparations are in full swing for disciplined conduct of the same. Response from farmers and their supporters has been tremendous from all over the country," the statement said.

However, there is no official confirmation about the same from Delhi, Haryana and Uttar Pradesh police so far. Delhi Police Commissioner said that farmers have not given their final route for the rally in written form and that they will comment on it once they receive it in writing.

Farmers' leader Abhimanyu Kohar claimed that the Delhi Police has given them permission for the tractor parade to be held on January 26.

The tractor march is likely to start from Ghazipur, Tikri, Singhu border points but the details are yet to be finalised.

Swaraj India leader Yogendra Yadav said that the 'historical and peaceful parade' would have no effect on the Republic Day parade or the security arrangements. Gurnam Singh Chaduni of the Bharatiya Kisan Union also urged the farmers to maintain discipline and follow the instruction issued by the Committee.

This development has come after the Supreme Court said that it would not take any decision on the tractor parade and left it to the police. Following the top court's stand, the government said that it will leave it for the police to decide on the event.

Meanwhile in its statement, the Samyukta Kisan Morcha said that at least 151 people have lost their lives in the farmers' agitation. "We extend our deep condolences to all martyrsFarmers and labourers continue to come to Delhi from all over the country. Preparations are going on at different places for the Kisan Republic Parade announced by the Morcha," the statement said.