After a meeting held at Mehbooba's house, Abdullah, who turned 84 earlier this week, said the alliance is fighting for the restoration of special status to Jammu and Kashmir and is an "anti-BJP platform" and not an anti-national amalgam 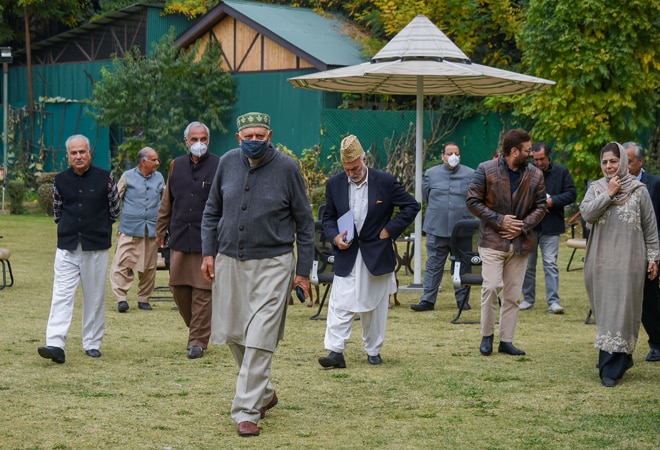 Seven mainstream parties of Jammu and Kashmir on Saturday gave a formal shape to their recently cobbled alliance for the restoration of Article 370, electing National Conference's Farooq Abdullah as its chairman and PDP chief Mehbooba Mufti as vice-chairperson, and asserted that theirs was "not an anti-national" grouping.

Veteran CPM leader M Y Tarigami was elected as the convenor while Lok Sabha member from South Kashmir Hasnain Masoodi would be the coordinator of the conglomerate known as Peoples Alliance for Gupkar Declaration (PAGD). Sajjad Gani Lone of People's Conference would be the spokesman for the amalgam.

After a meeting held at Mehbooba's house, Abdullah, who turned 84 earlier this week, said the alliance is fighting for the restoration of special status to Jammu and Kashmir and is an "anti-BJP platform" and not an anti-national amalgam. "I want to tell you that this is false propaganda by the BJP that the PAGD is anti-national. I want to tell them that this is not true. There is no doubt that it is anti-BJP, but it is not anti-national," he told reporters.

Abdullah alleged that the BJP has tried to break the federal structure through acts like the abrogation of Article 370 and dividing Jammu and Kashmir into two union territories "They have tried to destroy the Constitution of the country, they have tried to divide the nation, to break the federal structure which we saw what they did on August 5 last year," the NC president said. "I want to tell them that this (PAGD) is not an anti-national jamaat. Our aim is that the people of Jammu, Kashmir and Ladakh should get their rights back. That's where our battle is. Our battle is not for more than that," he said.

Abdullah said the BJP was doing propaganda against the constituents of the PAGD in Jammu and elsewhere in the country. "They are trying to divide us (people of Jammu Kashmir and Ladakh) in the name of religion. This attempt will not succeed. This is not a religious battle, this is a fight for our identity, and for that identity, we are standing together," he said.

The amalgam, which met for the first time after its formation, will come out with a white paper within one month on governance in Jammu and Kashmir over the past one year since the abrogation of article 370, Lone told reporters after the meeting. "The white paper will not be rhetoric.It will be based on facts and figures to present the reality to the people of Jammu and Kashmir and around the country... An impression is being given that all the corruption had happened in Jammu and Kashmir," Lone said.

The amalgam decided to hold its next meeting after a fortnight in Jammu, followed by a convention in Srinagar on November 17. As a mark of defiance to the constitutional changes made by the Centre with respect to Jammu and Kashmir last year, the alliance adopted the flag of the erstwhile state as its symbol. While the Communist Party of India's Kashmir head A R Trukroo joined the PAGD, Jammu and Kashmir Pradesh Congress Committee has quietly distanced itself from the alliance. JKPCC chief Ghulam Ahmad Mir, who was part of the meetings that took place before the formalisation of PAGD earlier this month, has skipped the last two meetings.

The JKPCC had issued a statement after the previous meeting that Mir could not attend due to the advice of doctors. This time the party did not explain its absence from the meeting.

SMS, QR code-certificate, centres at schools: How India's vaccination drive may shape up