All India Kisan Sangharsh Coordination Committee (AIKSCC), a platform of 250 farmer organisations has announced nationwide protest on 4 November to warn the government against going ahead with inclusion of agriculture in RCEP 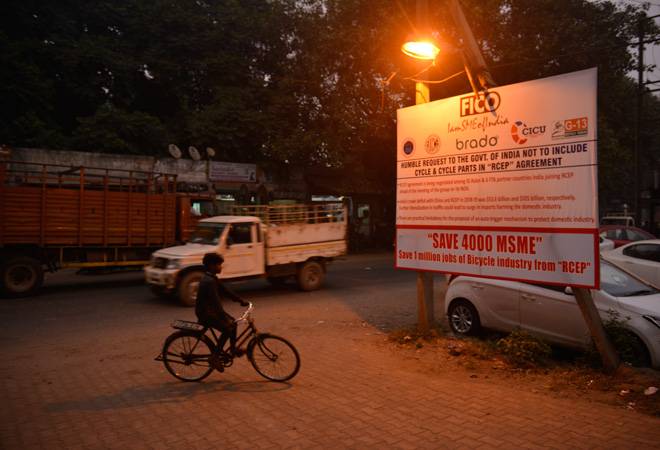 Singh's biggest nightmare these days is RCEP, the proposed Regional Comprehensive Economic Partnership, a mega trade deal which India and 15 other countries, including China, is negotiating at the moment. Singh believes that once India joins RCEP, even the 25 sewing machines that he and his small team manages to assemble each day, will cease to have buyers.

The likes of Singh are fighting a tough battle with importers of Chinese sewing machines. The retail cost of Singh's sewing machine - which he contract manufactures for several small firms across India, on an average, comes to about Rs 6,500 a piece. The Chinese product, with a much attractive finish, sells at Rs 7,500. The Rs 1,000 margin varies at times, and there is an increasing preference for superior looking products even if it means a nominal price premium.

Singh who used to run two shifts, seven days a week till about two years ago is now managing with one shift now. Sunday is a holiday. All because of increasing demand for Chinese sewing machines. RCEP can change the rules of the game dramatically as the current Chinese onslaught happens even after India levies 30 per cent import duty on sewing machines and components originating from China. If China gets concessional tariff or no-tariff entry to India, Singh says, it will put an end to his business.

Hardly two kilometers away from Singh's firm 'Bhawan Industry' is the office of the Federation of Industrial and Commercial Organisation (FICO), the industry association that represents hundreds of MSME entrepreneurs of Ludhiana's industrial clusters. A placard displaying 'No to RCEP' in unambiguous terms greets you as you enter FICO. "RCEP will make all of us traders as we will not be able to compete with duty free imports from China", says Gurmeet Singh Kular, FICO's president. Kular heads a company that is into bicycle and cycle parts manufacturing, yet another sector which is facing Chinese heat despite the current 30 percent import duty advantage. "Even with import duty, bicycle industry is finding it difficult to compete with China. The situation is the same with almost every industrial segment our association represents", Kular says.

Also Read: RCEP: Govt under pressure to abort the pact, if not delay it

MSMEs are not the only ones that are wary of RCEP.

All India Kisan Sangharsh Coordination Committee (AIKSCC), a platform of 250 farmer organisations has announced nationwide protest on 4 November to warn the government against going ahead with inclusion of agriculture in RCEP. V M Singh, Convenor, AIKSCC informs the protest is planned on the day RCEP negotiations are expected to conclude.

AIKSCC says that the secrecy surrounding the seven year long negotiations on RCEP is a mockery of democracy as no draft of the negotiation text has been made public, and state governments have not been consulted and that there has been no discussion in the Parliament on this issue so far.

It has demanded instead of signing the agreement on 4 November, the government should make the provisional text of the agreement public and hold consultations with farmers, farm organisations, state governments and other stakeholders before taking a final decision. Indian MSMEs will also gain if the government decides to make its negotiation position public before agreeing to the trade deal.

Commerce minister Piyush Goyal who is about to leave for Bangkok, for the RCEP negotiations in a couple of days does not know Singh. Nor would he have heard about the industrial sector - hand made sewing machines Singh represents. But it will be hard to ignore cumulative voices being heard from across the country, against RCEP and its unknown perils.