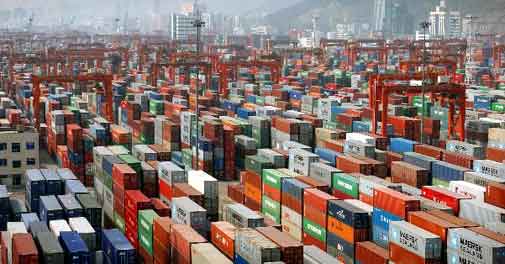 The Federation of Indian Exports Organisation (FIEO) has said India's exports will not be able to achieve the target of $325 billion in the current financial year and will fall short by about $10 billion.

"Domestic factors like declining manufacturing growth and slow improvement in the global demand are the main reasons for slow growth in the country's exports. We will not be able to achieve the $325 billion exports target," FIEO President Rafeeq Ahmed said.

The country's merchandise exports would touch $312-315 billion by the end of this fiscal, ending March 31.

During April-January, exports grew by 5.71 per cent to $257 billion, while imports dipped by 7.81 per cent to $377 billion. The trade deficit was about $119 billion. In the remaining two months (February and March), the country requires about $70 billion to reach the target.

Ahmed said that liquidity is a big issue for exports and pending claims of refund of service tax, duty drawback, rebate claims and VAT are affecting exports.

"The government should not fix annual targets for exports. We should fix a target for five years and work accordingly," he added.

FIEO is working on a paper for the new Foreign Trade Policy for 2014-19.

"In the next two and a half months time, we will submit the paper with our recommendations to the new government. It will includes measures which should be taken up to boost exports," Ahmed said.

There is an urgent need to enhance investments in building infrastructure such as roads and ports, he said.

"Inadequate infrastructure is impacting exports. Transactions costs is very high," he said, adding that the banks should provide credit at affordable rates to exporters.

The manufacturing sector, which constitutes over 75 per cent of the index, declined by 1.6 per cent in December, against a contraction of 0.8 per cent in the year-ago period.

Finance Minister P Chidambaram in the Interim Budget speech has said that India's exports are expected to grow by 6.3 per cent to $326 billion during the current fiscal.

India goes to polls during April-May, vote count on May 16