Flipkart has also bolstered its infrastructure network by adding a total of 16 flex fulfilment centres and 15 mother hubs to its supply chain network. 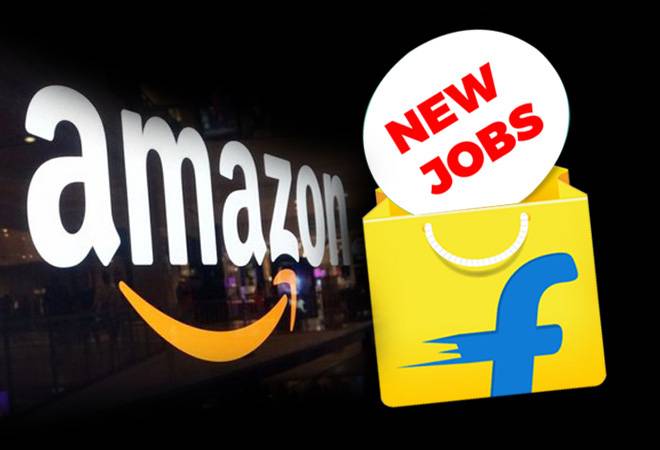 There's just two days to go before the biggest festive showdown of the year between Flipkart and Amazon kicks off. The latter will launch its five-day Great India Festival on October 10, the same day that Walmart-backed Flipkart kicks-off its four-day Big Billion Days event. The flagship events, in fact the entire festive season, not only promise exciting offers for shoppers, but have also given a huge boost to job creation.

According to Mint, in the last few months, Flipkart and Amazon have collectively hired about 80,000 people, including temporary workers, to handle the massive spike in orders during the sale season. The number of new jobs runs into a few lakhs if indirect jobs are also taken into account.

For instance, the Bengaluru-based homegrown etailer has hired 30,000 people to bolster its supply chain and logistics unit in the last few months. Most of the new hires are delivery boys and those managing deliveries in warehouses and hubs.

Moreover, Flipkart estimates that its seller partners have added over 5 lakh indirect jobs in packaging and warehouse management. Incidentally, the company also partners these sellers for providing the right training to the hired talent.

According to the company, the "hiring and upskilling of the newly recruited staff - all of whom undergo training in supply chain processes for their respective function - is in line with the government's National Skill Development Mission", and will provide a "major boost" to local employment and the economy. The training prepares new employees to work in tech-driven supply chains, food-tech and other allied industries.

Flipkart has also bolstered its infrastructure network by adding a total of 16 flex fulfilment centres and 15 mother hubs to its supply chain network.

"Along with ensuring that our customers have a seamless shopping experience, we want the economy to benefit from the increased activity. By generating employment and enabling our sellers to scale their businesses during this time, we're playing an important role in driving the industry and subsequently the economy," Flipkart CEO Kalyan Krishnamurthy told the daily.

Not to be outdone, Amazon India has reportedly hired around 50,000 temporary workers to pick, pack, ship and deliver orders in cities like Mumbai, Delhi, Hyderabad, Chennai, Bengaluru, Ahmedabad, Pune. A number of these seasonal recruits are working in its call centres across 16 cities.

Amazon India Vice-President (India customer fulfilment) Akhil Saxena told the daily that the company had more than doubled the number of seasonal associates in its fulfilment network and customer service sites compared to the previous festive season.

The ramped up recruitment drive is a part of the company's ongoing infrastructure and delivery network augmentation exercise. Amazon boasts more than 50 fulfilment centres across 13 states and close to 150 delivery stations across the country.

Significantly, the company has not only recently launched its Hindi version, but is also offering call centre support in several regional languages such as Tamil, Kannada and Telugu.

"Over 1 lakh people are working in the e-commerce sector on the payroll, and during the festive season, the requirement just doubles to 2 lakh. Also, ecommerce companies see at least 5X [five-fold] growth during the festival season beginning October and it goes on till the middle of January," Lohit Bhatia, CEO, IKYA Human Capital Solutions, A Quess company, told Deccan Herald.

About 20 million people are expected to shop on various e-commerce platforms during the festive sale next month, translating into sales of around $3 billion for players like Amazon and Flipkart, according to a report by research firm RedSeer.