The strong numbers of the index of industrial production notwithstanding, finance minister Pranab Mukherjee on Friday maintained a conservative growth forecast of 8.75 per cent for this fiscal.

The strong numbers of the index of industrial production (IIP) notwithstanding, finance minister Pranab Mukherjee on Friday maintained a conservative growth forecast of 8.75 per cent for this fiscal.

"I am a bit conservative, so I would be happy if it (GDP growth) is 8.75 per cent," Pranab Mukherjee said at the annual general meeting of the Associated Chambers of Commerce and Industry of India (Assocham).

"Figures suggest the industrial growth for the past seven months averaged at 10.3 per cent. We hope double-digit momentum in industrial growth will be sustained," Mukherjee said. IIP numbers zoomed to 10.8 per cent in October 2010. 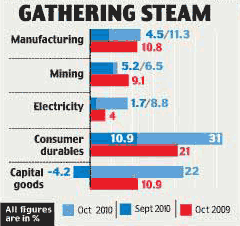 "Therefore, recovery of exports is absolutely necessary and those are linked with global developments," he added.

Mukherjee said because of the stimulus, the fiscal deficit widened to over 6.4 per cent in the last financial year but exuded confidence that it would be pruned to 5.5 per cent this year, as projected in the Budget.

The government plans to bring down the fiscal deficit to three per cent by 2013-14.

"Our rural economy is quite insulated from global impulses. I have no hesitation in saying that the rural market in India has saved the woes of many an urban Indian," he said.

"It has shown that for business in India to gain and sustain itself, it is important to have a strong rural footprint. Indeed, I would urge the business community to focus more proactively on our rural areas," he said.

On the current political situation he said that the Indian democracy has become noisier.

"Perhaps our democracy has become a bit noisier. Time has come when a little silence is called for," Mukherjee said.