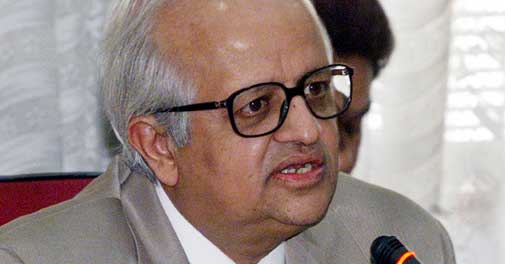 The Lok Sabha on Monday passed the Bill, barely eight months ahead of the 2014 general elections. It will now have to approved by the Rajya Sabha. The Bharatiya Janata Party (BJP) has already dubbed the law as "vote security bill".

"But given the macroeconomic situation just now, whether we can afford it (food security plan) right now? Timing is not right, timing is an issue," Jalan said, replying to a query whether the food security plan will increase the government's fiscal stress.

The passage of the Bill in Parliament will pave the way to give nation's two-third population the right to 5 kg of foodgrain every month at highly subsidized rates of Rs 1-3 a kg. At Rs 1,30,000 crore government support, the food security programme will be the largest in the world. It would require 62 million tonnes of foodgrains.

"We should not do this because of electoral considerations. We should do it because it can be done, it needs to be done. And this is a desirable thing to happen," Jalan said.

His comments come within days of RBI in its annual report raising concerns about the viability of the Food Security law.

Jalan further said: "Current macroeconomic situation is very distressing as of now. India's GDP growth is low, CPI is high, current account deficit (CAD) is high, fiscal deficit is high, and you are seeing there is no confidence in the market."

Even ratings agency Moody's expressed its concerns on Thursday, saying as the Bill is likely to be implemented in the remaining months of the current fiscal, its impact on government finances will be less in 2013-14, but much more in the years to come.

The total food subsidy budgeted in the current fiscal is Rs 90,000 crore, of which Rs 10,000 crore is towards the implementation of the programme.

Jalan, who held office during the time of the Asian crisis of 1997-98, said that RBI will have to take measures which are supportive of investment and confidence boosting.

Finance Minister P Chidambaram had earlier this week expressed confidence that the implementation of the food security programme will not impact India's fiscal deficit. He committed to containing it at 4.8 per cent of the GDP.