Naidu was on his way to a TDP protest when he was served notice and detained at the airport. After the police stopped him from leaving the Tirupati Airport, Naidu initiated a sit-in protest by squatting down on the airport floor 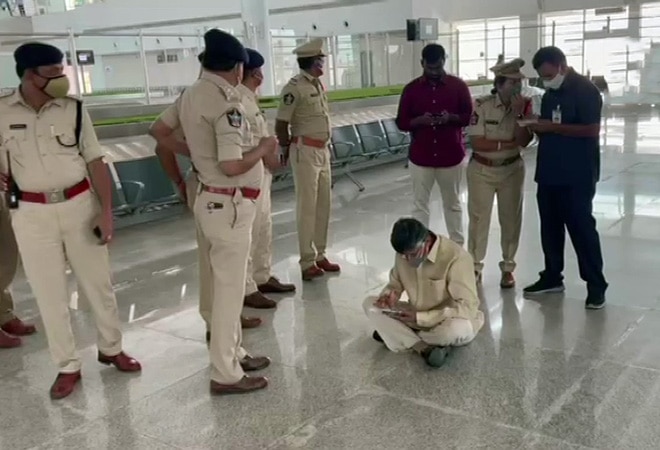 Former Andra Pradesh Chief Minister and TDP chief N Chandrababu Naidu was detained by the police at Tirupati Airport on Monday.  Naidu was on his way to a TDP protest when he was served notice and detained at the airport. After the police stopped him from leaving the Tirupati Airport, Naidu initiated a sit-in protest by squatting down on the airport floor.

"What is this? What is this... don't I have fundamental rights to meet the collector? What is happening to this country? I worked for 14 years as chief minister. I am a leader of Opposition. What is this tamasha. Why did you detain me? You didn't give me permission... I will sit right here," Naidu was heard saying to the police in a video tweeted out by the former Chief Minister.

In the caption for the video, Naidu wrote, "We will not be stopped. We will not be silenced. Your fear-driven, state-sponsored vendetta won't stop me from reaching out to my people.

In the notice served to Naidu, the police have claimed that the municipal election process will be disrupted if Naidu went ahead with the protest programme. The police have also stated that the risk of contracting the coronavirus at the protest programme is very high because of the rising COVID-19 cases in the second wave of the outbreak, according to The Times of India.

"Because Police Act 30 and the model code of conduct are in vogue and in our sincere efforts to ensure a free and fair poll process, we are forced to detain you," notes the notice which was served to the TDP chief by Renigunta police.

The TDP has accused the Yuvajana Sramika Rythu Congress Party (YSR), which is the current ruling party in Andra Pradesh, of using pressure tactics to get the opposition candidates to withdraw from the municipal elections scheduled on March 10. Under the leadership of Naidu, the TDP had planned a protest against YSR's tactics. However, the local police had not granted permission for holding the protest.