Asia's third largest economy likely grew 5.3 per cent in the first quarter of this financial year (April-March), up from 4.6 per cent in January-March, according to 40 economists surveyed by Reuters last week. 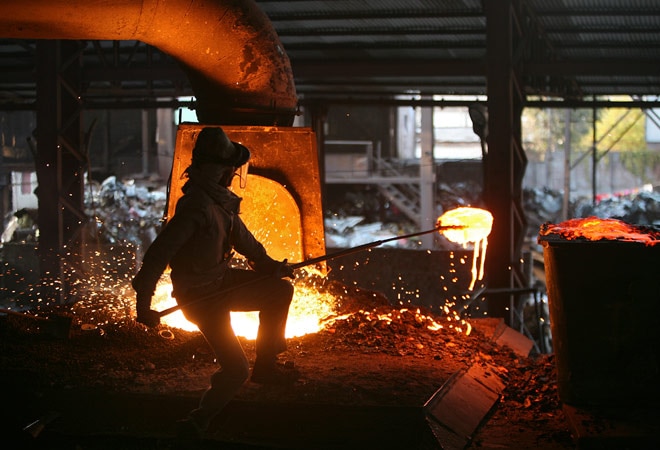 India's economy likely grew at its fastest in two years between April and June, according to a Reuters poll, as improved sentiment after Narendra Modi's election victory in the middle of the quarter coincided with a rebound in investment, manufacturing and construction.

Prime Minister Modi is expected to deliver major reforms, but the lack of progress on that front, along with poor monsoon rains is expected to hamper the recovery in growth from worryingly low levels.

Asia's third largest economy likely grew 5.3 per cent in the first quarter of this fiscal year (April-March), up from 4.6 per cent in January-March, according to the median consensus of over 40 economists surveyed by Reuters last week.

That would be the fastest since the quarter that ended in March 2012 and reflects the upturn in factory activity during recent months. Official gross domestic product data is due to be released on Friday.

"Capital goods, a leading indicator for investment activity, logged a significant 13.9 per cent rise in output in the first quarter of FY15," said Aditi Nayar, Senior Economist at ICRA.

Indian manufacturing activity grew at its quickest pace in 17 months in July as order books swelled, marking the ninth consecutive month of expansion according to the HSBC Purchasing Managers' Index (PMI) survey, compiled by Markit.

And factory production grew for the third straight month in June.

Economists, however, did not significantly change their growth forecast for the 2014-15, with the average at 5.4 per cent.

For all the hopes invested in Modi's government, economists cautioned that the economy's momentum depended on reforms that could prove difficult to pass through Parliament.

Despite is massive majority in the lower house, the government lacks a majority in the upper house and it has so far failed to initiate major reforms, and has been confined to taking minor steps to encourage saving and investment.

The poll also showed India's current account deficit likely widened to $7.1 billion in the April-June quarter, compared to a deficit of $1.2 billion in the previous three months, after restrictions on gold imports were lifted.

In percentage terms, the current account deficit probably widened to 1.50 per cent of gross domestic product against 0.20 per cent in Jan-March quarter.

Finance Secretary Arvind Mayaram said last month that India needs to keep its current account deficit between 2.0-2.5 per cent for 2014/15.