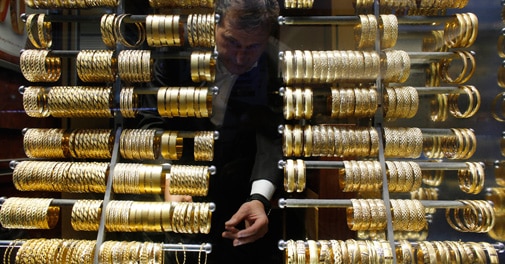 Gold prices on Friday rose by Rs 480 to hit a two-week high of Rs 28,680 per ten gram in the national capital, recording its second biggest single-day rise this year, tracking a firming global trend.

Besides, rising demand from jewellers and stockists also supported the upside, traders said.

Silver also spurted by Rs 800 to Rs 46,000 per kg on increased offtake by industrial units and coin makers.

The precious metal had recorded its biggest single-day rise of Rs 605 on June 20 this year.

On the other hand, silver coins maintained a steady trend at Rs 79,000 for buying and Rs 80,000 for selling of 100 pieces in restricted buying activity.

Curbs on gold import can go after situation improves:FM