The ending of under-recoveries caused by selling diesel below cost has been made possible by the softening international oil rates and the monthly price increases. 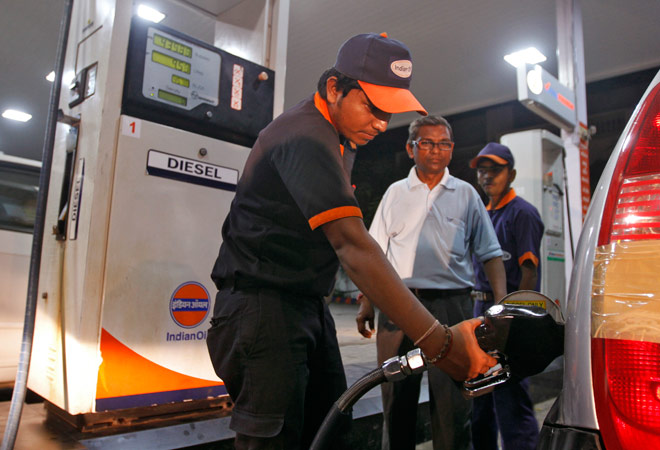 For the first time in the history of the regulation era on diesel , the under-recovery, or revenue loss, applicable on the fuel for the second fortnight effective Sep 16 has been wiped out, and there is instead a profit on sales, the government announced on Monday.

Announcing the product-wise under-recovery of state-run oil marketing companies, the petroleum ministry said that diesel in the second fortnight of the month effective Sep 16 will go into "over-recovery" of 35 paise a litre, fuelling expectations of a rate cut for the first time in seven years.

The ending of under-recoveries caused by selling diesel below cost has been made possible by the softening international oil rates and the monthly price increases.

Diesel prices have been raised monthly by 50 paise a litre in line with the government's January 2013 decision. Rates have cumulatively risen by Rs 11.74 per litre in 19 instalments since January 2013.

While the government is keen to pass on the benefit of cheaper oil to consumers, it is hesitant to free diesel prices just before assembly elections in four states - Jammu and Kashmir, Maharashtra, Bihar and Jharkhand, an official source told IANS.

"In the case of PDS kerosene and domestic LPG (cooking gas), the under-recoveries for the second fortnight of September 2014 will continue to be (as in the previous fortnight) Rs 32.67 per litre and Rs 427.82 per cylinder, respectively," the petroleum ministry said.

"Oil marketing companies, effective Sep 16, 2014, are now incurring combined daily under-recovery of Rs 190 crore on the sale of diesel, PDS kerosene and domestic LPG," a statement said. This is lower than Rs 195 crore daily under-recoveries during the previous fortnight.

With international crude oil prices dropping below the $100 a barrel-mark last month, petrol rates were cut thrice during the month resulting in a price difference with diesel that has fallen below Rs.10 a litre.

The international crude oil price of the Indian Basket on the previous trading day on Monday, had dropped to Rs.$95.50 per barrel.