Rupee fall: Wealthy NRIs may not prop up the economy this time

The patriotism of wealthy overseas Indians has helped the country avert economic crises in the past and it is little surprise that embattled policymakers are turning to them again to plug a record trade gap that is battering the rupee. 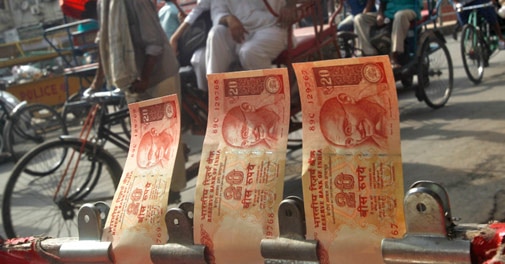 The patriotism of wealthy overseas Indians has helped the country avert economic crises in the past and it is little surprise that embattled policymakers are turning to them again to plug a record trade gap that is battering the rupee .

This time, though, big investors among the more than 25-million overseas Indian community - the world's second-largest diaspora - are staying away as the economic outlook darkens and political instability looms ahead of national elections.

Shoring up inflows from the overseas Indians is a key weapon in Finance Minister P. Chidambaram's arsenal to prop-up the rupee that has lost 20 per cent against the dollar so far this year and which dropped to a record low on Wednesday.

The rupee's crash has boosted remittances, mainly from blue-collar workers overseas - particularly in the Gulf - who can get more rupees for hard currency. However, it has not triggered a surge in high-value investments in real estate, private equity funds and stock markets, bankers and wealth managers said.

Underlining the hesitancy, flows from non-resident Indians (NRIs) into bank deposits in the April-June quarter dropped to $5.5 billion from $6.6 billion a year-earlier, central bank data shows.

Investments in real estate by overseas Indians dropped about 30 per cent in the fiscal year that ended in March, according to the Confederation of Real Estate Developers' Associations of India (CREDAI), an umbrella group of local property developers.

"People feel like there are too many unknowns. The most recent government has been ghastly, and nobody quite knows what comes after it. I haven't been optimistic about India for quite a while," said Vasant Prabhu, chief financial officer of Starwood Hotels & Resorts Worldwide Inc in New York.

"What makes it hard, you don't know what the bottom of the rupee is," he said in comments underscored by a rupee that stumbled from 63 per dollar on Friday to almost 69 per dollar on Wednesday - a sharp move over such a short period of time for a currency.

His comments were echoed by wealth managers and bankers in Britain, the United States and India who said non-resident Indian clients saw too many uncertainties despite the tantalising prospect of buying assets with a record-low rupee.

Economic growth is at its weakest in a decade and seen slowing further, New Delhi is struggling to close a record deficit in the current account - the broadest measure of a country's international trade - and a national election that must be held by May could tempt the government to spend to win over voters and so undermine its fiscal discipline.

In addition, emerging markets are losing favour with investors generally as the prospect of the United States reining in its economic stimulus draws cash into US assets.

In a bid to attract funds, India liberalised bank deposit schemes and some banks raised rates for overseas Indians this month. They could secure interest rates of more than 8.5 per cent on one-year rupee deposits and as much as 10 per cent on three-year accounts, a relatively high return compared with many other countries where rates remain near historic lows.

"All these folks always had this strong belief that India is the safest country to invest and four, five years back when the rest of the world was collapsing India was still growing," said Anil Behl, head of wealth and strategy at lender IndusInd Bank , referring to the global financial crisis.

"That mood has changed now," he said. "I can certainly feel that some NRIs are looking at dollar-based products from international stables ... they are very wary of pure rupee products."

LARGE HIT
The government goes out of its way to tug at the heartstrings of white-collar expatriates, such as those in Silicon Valley and at top investment banks in London, to raise funds and cushion the impact of slowing institutional inflows. There is even a ministry for Overseas Indian Affairs which has NRI investment as a core goal.

New Delhi has managed to lure them in the past with attractive deposit schemes and bonds. It issued a five-year Resurgent India Bond in 1998, raising more than $4 billion, and in 2000 it raised $5.5 billion through a deposit scheme.

India, Asia's third-largest economy, was the top recipient of remittances from diaspora in 2012 with about $70 billion, followed by China at $66 billion, World Bank figures show. India received about $63 billion in remittances in 2011.

Banks, including RBS, Barclays and Morgan Stanley, beefed up their teams in cities like New York, Singapore, Dubai and Hong Kong in recent years to advise overseas Indians on investment opportunities back home.

But many investors are now staring at losses as the rupee's plunge since May has wiped out gains they made on investments in private equity funds and mutual funds in the last few years.

"For people who are dollar-invested, that's a large hit," said Ajay Kaisth, principal of New Jersey-based Kai Advisors, which has $30 million under management, of which more than 60 percent is from Indian clients.

LOSING FAITH
The economy is likely to grow even more slowly in fiscal 2013/14 (April-March) than the decade-low of 5 percent struck the previous year, as investment will stay weak due to a dearth of reforms and uncertainty ahead of the election, a Reuters poll showed.
The rupee has become the worst performer by far among Asian emerging-market currencies tracked by Reuters, despite frantic attempts by the government and central bank to support it.

Lalit Kumar Jain, chairman of CREDAI said property purchases by Indian expatriates were now needs-based rather than speculative, reducing what has been in the past a key type of demand.

"And that's a cause of concern because the biggest champion of India is its diaspora, and if they are losing faith you can imagine how much the non-Indian investor would be losing faith."