Rakesh Tikait announced that the farmers have given time to the government till October 2 to repeal the laws, after that, they will do further planning 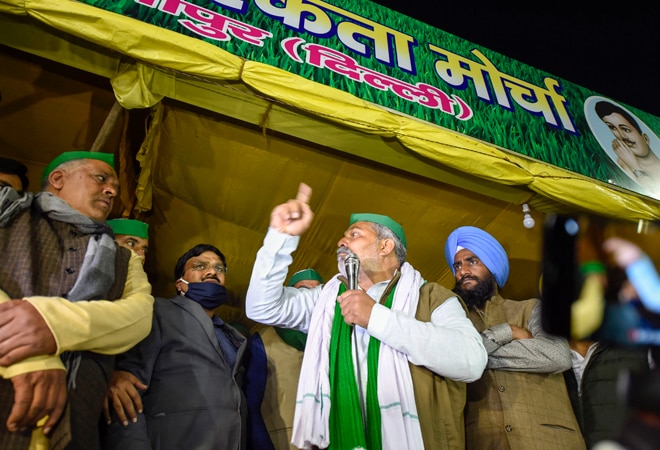 The ongoing farmers' protest at Delhi's borders might run till October 2 or even way beyond that if the Centre does not repeal the farm laws, according to Bharatiya Kisan Union leader Rakesh Tikait.

Tikait announced that the farmers have given time to the government till October 2 to repeal the laws, after that, they will do further planning.

"We have given time to the government till October 2 to repeal the laws. After this, we will do further planning. We won't hold discussions with the government under pressure," Tikait said.

Meanwhile, farmers on Saturday blocked roads and highways in several regions of the country from 12 noon to 3 pm on the call given by their unions for a nationwide 'Chakka Jam'. Around 50 people were detained near Shaheedi Park in Delhi for allegedly holding a protest in support of the 'chakka jam'.

Besides, the entry and exit gates of several metro stations, including Mandi House, ITO, Lal Quila, Jama Masjid, Janpath, Central Secretariat, and Vishwavidyalaya were closed in view of the 'chakka jam'

Thousands of farmers have been protesting since late November at Delhi's borders with Haryana and Uttar Pradesh, demanding a rollback of the Farmers' Produce Trade and Commerce (Promotion and Facilitation) Act, 2020, the Farmers (Empowerment and Protection) Agreement on Price Assurance and Farm Services Act, 2020 and the Essential Commodities (Amendment) Act, 2020.

The protesting farmers have expressed apprehension that these laws would pave the way for the dismantling of the minimum support price (MSP) system, leaving them at the "mercy" of big corporations.

However, the government has maintained that the new laws will bring better opportunities to farmers and introduce new technologies in agriculture.

25 nations in line for 'Made in India' coronavirus vaccine, says Jaishankar