Patidar leader Hardik Patel has accused the ruling BJP of tampering with the electronic voting machines (EVMs) after trends showed the saffron part leading against the Congress in Gujarat election results. 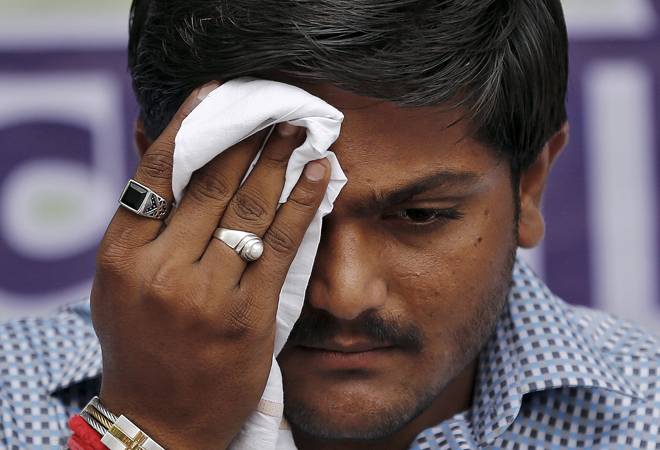 Is it a case of sour grapes? Patidar leader Hardik Patel has accused the ruling BJP of tampering with the electronic voting machines (EVMs) after trends showed the saffron part leading against the Congress in Gujarat election results. "I congratulate the BJP which wins the elections by tampering with the EVMs," he said sarcastically to the media.

The Patidar Anamat Andolan Samiti (PAAS) leader, who has aligned with the Congress in Gujarat, has alleged that the EVMs were rigged in constituencies that witnessed a close fight. "There has been tampering in EVMs in Surat, Rajkot and Ahmedabad, hence the gap is very less wherever tampering happened," said Patel, adding that "I urge all the opposition parties to take this concern against EVMs forward. If ATMs can be hacked, why can't the EVMs?" According to him, the atmosphere is such that no one can question the functioning of the EVMs.

"The EVMs from which the candidates were winning with 300 votes, after recounting the winning candidate lost by a margin of over 6,000 vote. It means there is something wrong in it," accused Patel. "They won using dirty tricks, by using money power in the state." He went on to challenge the BJP that "our andolan for reservation for the Patidars, on the issues of farmers, including waiving loans, and unemployment of youth, will continue".

Patel went so far as to tell the media that "we want to fight elections on ballot paper". "Look at Japan, Israel, Germany; they still use ballot papers despite having advanced technology," said the PAAS leader.

This is not the first time that Patel has raised the point of EVM tampering. In a series of tweets yesterday, he alleged that an Ahmedabad-based firm had made preparations to hack the source code of 5,000 EVMs with the help of 140 software engineers. "It would make people laugh but no one will consider what I say. If the human body, which has been created by God, can be fiddled with, why cannot EVMs?" he tweeted, and mentioned attempts to hack the EVMs particularly in the Patel and tribal-dominated constituencies such as Visnagar, Patam, Radhanpur, Unjha, Jetpur, Rajkot, Lathi-Babra, Chhota Udepur, Sant Rampur, Sanwli, Nadod and Dabhoi.

But at least one of his predictions has fallen flat: Patel had claimed that BJP would deliberately lose Himachal Pradesh to make the election results appear as genuine. However, the BJP has crossed the halfway mark in the northern state too.

Patel's claims have been rubbished by not only the BJP but also current and former Chief Election Commissioners and some Congress leaders.

Ola Foodpanda deal: After all, a customer dropped home late, may need a midnight snack