Gurdwara Nankana Sahib attack: Protesters raised slogans against Pakistan outside the embassy. The Foreign Office of Pakistan had denied the incident 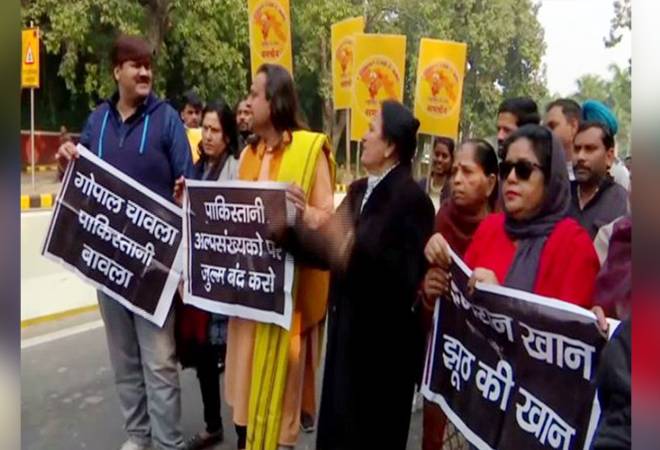 Delhi Sikh Gurdwara Committee and Akali Dal staged a protest outside the Pakistan Embassy in New Delhi over the attack on Gurdwara Nankana Sahib newar Lahore. Protesters raised slogans against Pakistan outside the embassy.

Pakistan is committed to upholding the law and order and providing security and protection to the people, especially the minorities, said the FO statement.

"Attempts to paint this incident as a communal issue are patently motivated. Most importantly, the Gurdwara remains untouched and undamaged. All insinuations to the contrary, particularly the claims of acts of 'desecration and destruction' and desecration of the holy place, are not only false but also mischievous," said the FO.

Videos of the stone-pelting emerged on social media. The Ministry of External Affairs condemned the attack and urged the Pakistani government to take immediate steps to ensure the safety, security and welfare of the members of the Sikh community.

Punjab Chief Minister Amarinder Singh and the Shiromani Akali Dal (SAD) also expressed concerns over the attack on Gurdwara Nankana Sahib. Cricketer Harbhajan Singh also urged Pakistan Prime Minister Imran Khan to help. "God is one...let's not divide it and create hate among each other... let's be human first and respect each other," said the off-spinner.