Hathras gangrape case: UP Police told Rahul Gandhi that he was being arrested under IPC Section 188 for violation of law and order 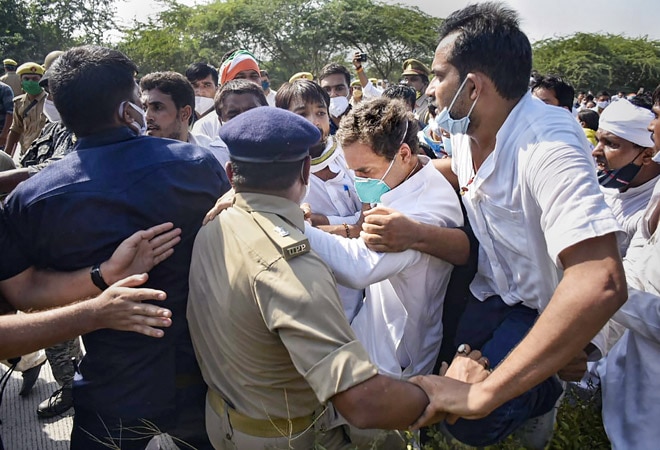 Rahul Gandhi has been detained by Uttar Pradesh police while he was on his way to meet the Hathras gangrape victim's family. Gandhi asked the police why he was being detained. "I want to walk to Hathras alone. Please tell me under which section you are arresting me," he asked the police. UP Police told him that he was being arrested under IPC Section 188 for violation of law and order.  Gandhi and sister Priyanka Gandhi Vadra were marching to Hathras along with hundreds of supporters amid a nationwide outrage over the death of the Hathras gangrape victim.

Noida ADCP Ranvijay Singh said that the Gandhis violated the Epidemic Act and that they will not be allowed to proceed.

Rahul Gandhi alleged that the police pushed him to the ground and lathi-charged as he and his sister were marching on the Delhi-UP highway. "Just now police pushed me, lathicharged me and threw me to the ground. I want to ask, can only Modi Ji walk in this country? Can't a normal person walk? Our vehicle was stopped, so we started walking," Rahul Gandhi asked.

The UP administration had implemented a ban on large gatherings and put up barricades along the border. The administration cited coronavirus for the ban. "Section 144 (of the Code of Criminal Procedure) has been imposed in the district. It will be in force till October 31," District Magistrate PK Lakshkar said on Thursday.

Rahul and Priyanka Gandhi's vehicle crossed the border but they were stopped at Greater Noida -- around 140 km away from Hathras. The duo then climbed out of their car and started walking accompanied by scores of Congress workers. They were shouting slogans against UP CM Yogi Adityanath. They were pushed by the police force.

UP Police have, however, said that the restrictions were in place due to the pandemic and that several policemen were diagnosed with coronavirus. Meanwhile, Congress has said that these are tactics to keep them away from the victim's village. Media has also been barred from the village.

The Samajwadi Party has also demanded the resignation of UP CM Yogi Adityanath.

The Dalit woman had suffered multiple fractures, paralysis and severe spinal injury after she was assaulted by four upper caste men. The UP Police allegedly took away her body and cremated her forcibly with the family locked at home.