How HDFC Bank made its shareholders richer than TCS & RIL

The race to $100 billion market value just got heated up with the entry of HDFC Bank. HDFC Bank just raised the stakes for the race to become the first Indian company to be valued at $100 billion, as India's largest private sector bank also became its first to cross the five trillion rupees threshold.
As the bank's share rose 2.63% since Wednesday's close, it became the third in the Rs 5 lakh crore club, which so far was a duel between the Mukesh Ambani promoted Reliance Industries (RIL) and the Tata Sons promoted Tata Consultancy Services (TCS).
RIL, which last year reclaimed its top ranking as India's most valuable company, is now on its way to become, possibly, the first Indian company to touch the $100 billion mark. The company's current market value hovers between $92 billion, making it the first Indian company to touch that figure.
Tata Consultancy Services (TCS) had, for long, been the front-runner to touch the coveted $100 billion mark, being India's most valued company for last 6 years. It had touched a peak market cap of $88 billion three years back, before sliding down. It is currently valued at $87 billion.
The three companies, which couldn't be more divergent, representing financial services, IT and oil refining, are the exclusive members of the Rs 5 lakh crore club, though at Rs 5.80 lakh crore, RIL is edging closer to the Rs 6 lakh crore mark - which has never been attained by any Indian company. HDFC Bank, in fact, beats the older Rs 5 lakh crore club members as it has given higher returns than both RIL and TCS combined. A person invested in all three companies would have earned more than twice from his HDFC Bank holding than from his TCS portfolio, and more than two and a half times than his investment in RIL. However, ore number of people have profited from RIL shares than from TCS and HDFC Bank combined. RIL however, does steal a march over both HDFC Bank and TCS when it comes to having happy employees, with the average pay packet at the Mukesh Ambani owned enterprise more than the combined average pay packets at the other two companies. In  fact, an average RIL employee earns almost three and a half times more than what an average banker at HDFC Bank earns. 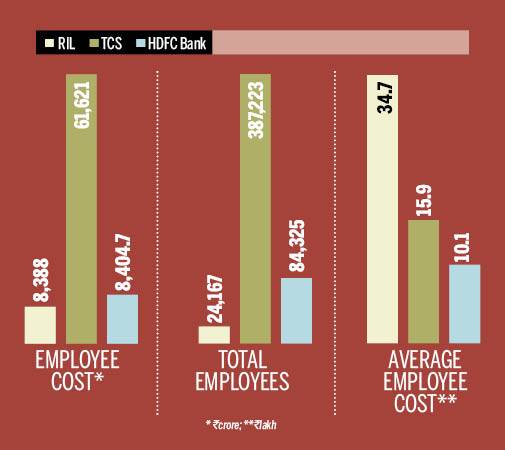 Make in India setback: 70 per cent of bullet train's parts to be made in Japan