Floods ravage North India: Over 500 people were stranded in several parts of Himachal as a number of roads have been blocked by landslides and flash floods, officials said. 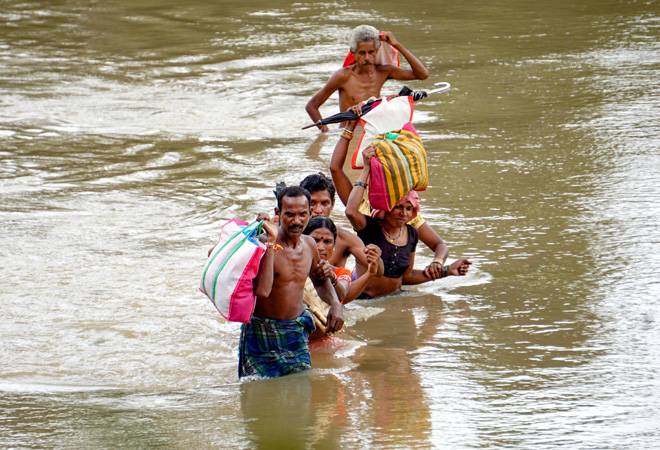 Following the devastation in South India, heavy rains have wreaked havoc in North India now including in Himachal Pradesh, Uttarakhand and Punjab. At least 28 people were killed in these states on Sunday. A flood alert has been issued in parts of Delhi, Haryana, Punjab and Uttar Pradesh as Yamuna neared the warning mark. The IMD has predicted the situation to continue in some parts of these states.

Light-to-moderate rainfall is likely occur at many places in Himachal in the next 24 hours with heavy rains expected at isolated places, Shimla Met centre Director Manmohan Singh said. Over 500 people were stranded in several parts of the state as a number of roads have been blocked by landslides and flash floods, officials said. Efforts are on to clear the roads and restore traffic to move them to safer places.

Multiple landslides blocked the flow of water in streams and formed a big artificial lake in Khadetar village in the sub-division. Residents of Trindi, Danni, Mairka, Lador, Thana, Hindorghaat, Letri and Jassur villages have been asked to vacate their houses, the official added.

Train services between Shimla and Kalka were disrupted on Sunday after multiple landslides blocked the rail route in the state.

Due to heavy rains, district officials in the state have ordered closure of all educational institutions in Shimla and Kullu on Monday.

Water supply has also been affected in Himachal Pradesh's Kangra district. The lift water supply scheme for 75 per cent area of the Jai Singhpur sub-division got damaged near Kangain bridge at Mand Khad. Welding of the damaged pipes was getting delayed due to incessant rains and it might take two-three days to restore the supply, the official said.

Jammu & Kashmir: Two persons have been rescued after they got stuck near a bridge in JAMMU after a sudden increase in the water level of Tawi river. Rescue operation still underway. pic.twitter.com/oV0hkltBrX

A total of 10 people have been killed in Uttarkashi. Search and rescue operations, which were hampered by bad weather on Sunday, resumed on Monday amid relatively clear weather in the affected area with three helicopters including one from the IAF pressed into service to take relief material including food packets and essential medicines to people.

With the improvement in weather on Monday rescue operations are going on in full swing in affected areas with state police, ITBP, PAC and SDRF personnel engaged in the exercise, said Disaster Management Secretary Amit Negi and IG SDRF Sanjay Gunjyal said at a joint press conference.

Heavy rains remained unabated in Haryana and Punjab on Sunday causing floods in some parts, while authorities sounded high alert in the two states. Following heavy rains in Aol village of Punjab, three members of a family were killed when the roof of their house collapsed. Haryana has asked the Army to remain on standby after 8.14 lakh cusec water was released from the Hathini Kund barrage in the Yamuna river. Eleven people, including four women, have been rescued after they got stuck when the overflowing water of Beas river flooded their village in Punjab's Gurdaspur district.

Delhi: Water level of Yamuna River recorded at 204.70 meters today (the warning level is at 204.50 meters), after more than 8 lakh cusecs of water released from Hathni Kund barrage. Delhi Govt has issued orders for evacuation, Civil Defence volunteers have been deployed. pic.twitter.com/wLhJtdxQjy

In Rajasthan, water has started receding and there was no flood-like situation anywhere in the state. An official said 49 people have died in rain-related incidents in the state since June 15 and 500 people have been evacuated from the rain-affected areas.

In West Bengal, weather in large parts of south Bengal, including the metropolis, improved after two days of torrential rain that led to waterlogging in many areas and snapped road links at several places.

In Uttar Pradesh, several rivers, including Ganga, Yamuna and Ghaghra, are in spate. Ganga is flowing above the danger mark in Badaun, Garhmukteshwar, Naraura and Farrukhabad. Similarly, the Sharda river at Paliakalan and the Ghaghra river at Elginbridge are flowing above the red mark, the Central Water Commission said.