The city's leader Carrie Lam warned on Tuesday that full-year growth could contract. Retail sales and tourism have plummeted 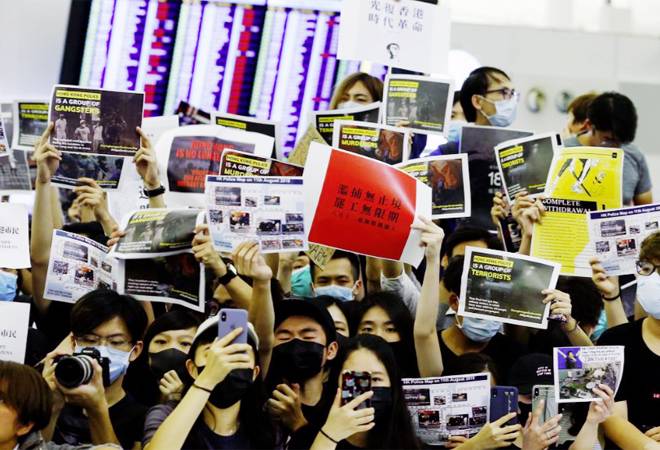 "Domestic demand worsened significantly," the government said in a statement

Hong Kong slid into recession for the first time in a decade in the third quarter, weighed down by increasingly violent anti-government protests and the protracted U.S.-China trade war.

The economy shrank 3.2% in July-September from the preceding period, contracting for a second straight quarter and meeting the technical definition of a recession, according to preliminary government data on Thursday.

From a year earlier, gross domestic product (GDP) contracted 2.9%. The readings were the weakest for the Asian financial hub since the global financial crisis in 2008/2009.

The government also revised down second-quarter GDP data to 0.4% year-on-year, from 0.6%, and a contraction of 0.5% quarter on quarter, versus 0.3% previously.

"Domestic demand worsened significantly," the government said in a statement.

"As the weakening economic conditions dampened consumer sentiment and large-scale demonstrations cause severe disruptions to the retail, catering and other consumer-related sectors, private consumption expenditure recorded its first year-on-year decline in more than 10 years."

The government said that with no sign of protests abating, private consumption and investment sentiment would continue to be affected.

Capital Economics said in a research note that while GDP would probably continue to contract in the fourth quarter, the pace of contraction should ease somewhat barring a further escalation in the demonstrations.

"Any recovery will be constrained by weak business investment, however, as the city's political crisis has done lasting damage to its reputation as a stable and autonomous financial hub," it said in a note to clients.

The city's leader Carrie Lam warned on Tuesday that full-year growth could contract. Retail sales and tourism have plummeted.

Almost all growth engines in the Asian financial hub stalled over the summer as shops shut to avoid sometimes violent clashes between riot police and protesters, while the Sino-U.S. trade war intensified. Hong Kong is one of the world's most popular tourism destinations and a bustling container port.

Retail sales fell the most on record year-on-year in August, while tourist arrivals dropped the most since Severe Acute Respiratory Syndrome (SARS) struck Hong Kong in 2003.

Protesters are angry at what they see as Beijing's increasing interference in Hong Kong, which returned from British to Chinese rule in 1997 under a "one country, two systems" formula intended to guarantee freedoms not seen on the mainland.